Back in March I posted about my love of package swaps, and I arranged an exchange with fellow blogger Jennifer from One Raw Bite.  She sent me all of these delicious goods from New Jersey and I had a marvellous time eating my way through them! 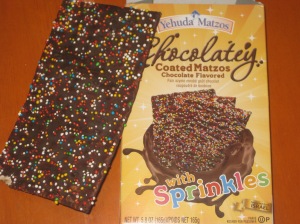 I had never had matzos before, so I wasn’t really sure what to expect from these.  For anyone else who is uninformed, they were big crackers, coated in dark chocolate and sprinkles.  They were so good!  These were the first things we tried from the package, enjoying them with a cup of tea and Game of Thrones. 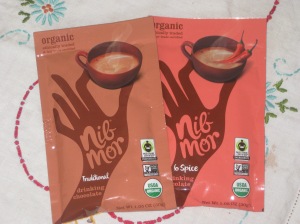 I love hot chocolate, but I don’t know of any vegan instant versions in the UK or Europe.  These packets were perfect for me!  The 6 Spice mix was actually a little too fiery for me, but the traditional one was perfect.

Of course, these are the things that excited me the most.  I’ve had Cleo’s Peanut Butter Cups before, but think I prefer these new-to-me Justin’s ones, with darker chocolate.  The gold peanut butter cup at the top was solid with nutty pieces, rather than filled with gooey butter as I’d expected, but it was still tasty.  The Larabar was amazing, like a raw Snickers.  Speaking of which, the Jokerz bar is the vegan version of the Snickers.  I’ve had the Mars before and loved it, and this was just as good.  I also enjoyed the Mahalo (vegan Bounty).  Whoever invented these was definitely onto a winner!  No No’s are vegan M&Ms, and I’ve had them just once before.  They are also delightful.  It’s so great being able to have these familiar sweets in a cruelty-free way. 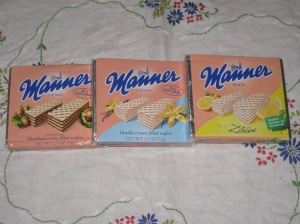 I love Manner wafers, but not all varieties are vegan.  Actually, the middle packet here (vanilla cream) contain milk powder, which I noticed before eating them.  The others were great, though.  They make a really good snack.  Downside:  they also make a lot of crumbs. 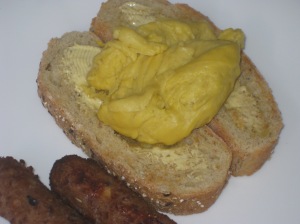 And onto the savouries.  The Follow Your Heart Vegan Egg has been the talk of the vegan community lately, and I was delighted to finally get my hands on some.  I decided to make a simple scramble as part of a nice weekend breakfast – unfortunately, I overcooked it a bit and it was a little rubbery.  Every picture I’ve seen on social media looks better than this one, so don’t let my photo deter you from trying this product.  It was nice, but to be honest I prefer tofu scrambles now.  If I can track down some more, I’ll try to make an omelette instead.

And here I had two different kinds of mac and cheese mix.  The pizza one was a bit weird – it was nice and creamy, but the taste was just strange. The Earth Balance one was better, it had both texture and taste.

The Pad Thai pot noodle was great for an emergency (eg. when I was too lazy to cook on a Saturday).  It was flavoursome and fast, and that’s exactly what you’d want from this kind of thing.

And finally this soybean spaghetti, which is packed with protein.  We used it in a stir fry, and thought they had a little less bite than we’d like – but probably because we overcooked them!  Anyway, they were really nice and it’s always good to have another source of protein up your sleeve.

I absolutely loved this package swap!  I got some new and exciting treats, and lots of good chocolate and peanut butter combinations.  This has made me more excited about the possibility of a trip to the USA, even though it doesn’t fit into our plans for the next year or two.

Of course, I’m now on the lookout for my next package swap!  I’ll be in the UK again soon, so if any readers from around the world are interested in some good British vegan treats, let me know!

This entry was posted in General and tagged vegan package. Bookmark the permalink.