Cookbook of the Month: Minimalist Baker’s Everyday Cooking (Part One) 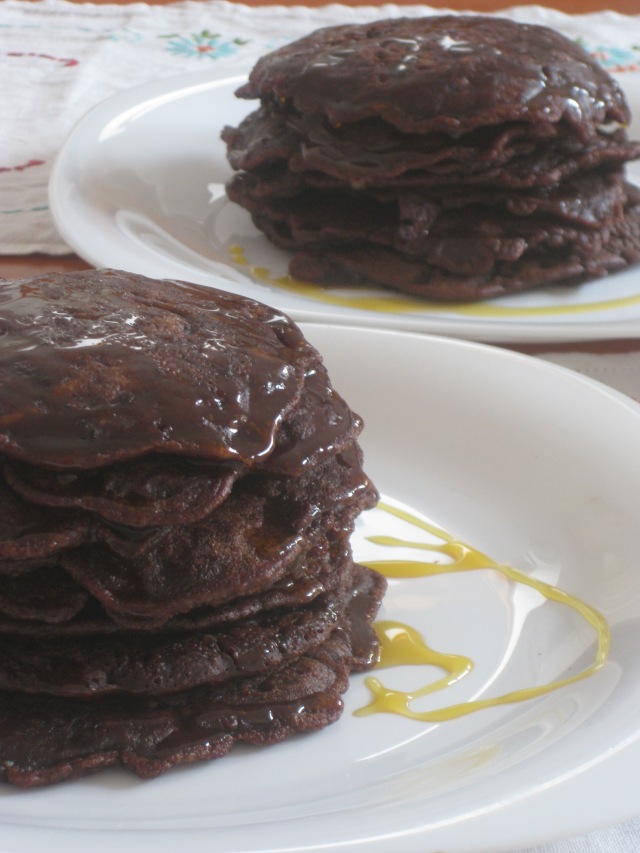 (In August I made nothing more taxing in the kitchen than a cup of tea!  Dr HH took over the cooking – and now he is taking over the blog as well.  He put me to shame by cooking so much that we need two posts to cover it all, so the review will continue next week.)

Hello! Dr HH here. Have you missed me? Probably not, as Ms HH keeps the good stuff coming all year round, but this month she returned to work whilst I was still enjoying summer holidays.  This led to me being tasked with the cooking so I’ll be providing the cookbook of the month write up.

Ms HH chose Minimalist Baker’s Everyday Cooking.  The Minimalist Baker started out (and continues) as a blog and has been so wildly successful that a cookbook has come from it.  Each of the recipes fits at least one of the three following criteria: 30 minutes or less, 10 ingredients or less (excuse the terrible grammar here, it is lifted directly from the book) or 1 bowl.  I guess Ms HH figured that the recipes shouldn’t be too taxing for simple old Dr HH.

The book is handily split into sections and I’ll talk you through them all as I go.  Where better to start than breakfast? 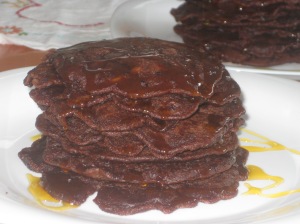 When starting with breakfast, who could look further than pancakes?  The Double Chocolate Gluten-Free Waffles Pancakes, to be precise. The recipe is for waffles, but I just used regular plain flour and thinned out the batter a little to made pancakes;  delicious, rich, decadent chocolate pancakes.  WIth cocoa powder and chopped chocolate in the batter, these pancakes were glorious.  They were a bit rich so it may have been a good idea to serve them with some fruit along with syrup.  The recipe called for me to curdle my almond milk before adding it to the batter but I have no idea why.  Answers on a postcard please. 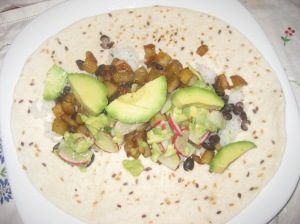 The Vegan Breakfast Burrito is the kind of thing I love, lots of different little elements that can be combined as one sees fit.  There were beans, avocado ‘slaw, delicious little crunchy bits of potato, rice and some more avocado slices for good measure.  The book does suggest throwing some salsa into the mix too as an optional ingredient and I feel the burrito needs it.  On the first day, we had the burritos without salsa and the main flavour coming through was lime from the ‘slaw, there weren’t any really great deep Mexican flavours that I expect from my burrito.  The next day I fried up the remaining beans with some onion, garlic, chilli, tomato and spices and it gave the dish a much needed lift.  I feel this recipe suffers a bit trying to fit the minimalist gimmick, there’s the salsa shortcut rather than cooking the beans well like in Thug Kitchen. 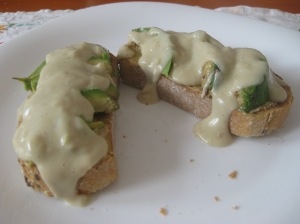 The Savoury Eggless Benedict is essentially a fancy avocado on toast.  The recipe included a slice of fried tomato, but neither of us is particularly keen on big slices of tomato, raw or cooked, so I decided to just leave that out.  I have no idea what Hollandaise sauce is supposed to taste like so I can’t comment on how authentic it was but I can say that this faux sauce (Hollanain’t!) was delicious.  It was thick and creamy.  Tahini is suggested as an optional ingredient, but I think that the sesame flavour coming through was a real highlight of the sauce and would strongly recommend adding it. 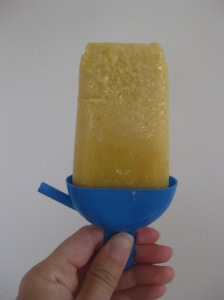 The Mango Coconut Lassi is in as a breakfast, but I decided to freeze them into little ice pops and what a great idea that was.  The pops were lovely and creamy but perhaps would have been better if I’d left some mango chunks in there.  This was a great treat on a hot summer day. 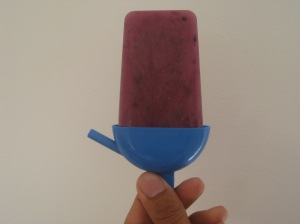 There are also the Cherry Chia Lassi Pops which are in the dessert section but I figured I’d throw them together with the previous recipes.  These weren’t quite as creamy but i did keep some giant cherry chunks in and they were great. 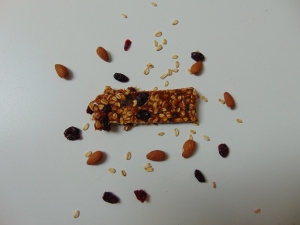 The Almond Butter + Jelly Granola Bars were wonderful sticky, sweet snacks.  I really enjoyed the extra flavour from roasting the oats and nuts rather than putting them in raw.  I used cranberries as my dried fruit of choice because cranberries are the king of dried fruit. 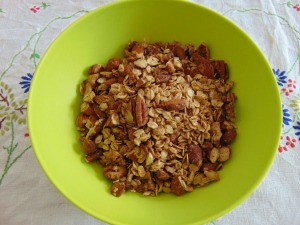 Most of my breakfast efforts went into making granola.  My first attempt at granola was the Homemade Hippie Cereal.  This was one of the first things I made from this book and a toasted mixture of nuts and syrup is meant to be mixed with puffed rice to make a breakfast cereal.  I quickly scanned the recipe and saw a sentence that said it could be served as granola without the puffed rice.  It eventually dawned on me that a bowl of crunchy sweet nuts may not have stretched to too many breakfast portions so I had to do some freewheeling.  I added 3 cups of oats and various quantities of extra sticky ingredients and came out with something reasonably close to granola.  It didn’t stick together too much and tasted a bit too sweet.  The lesson here is that when freewheeling, perfect results are not guaranteed. 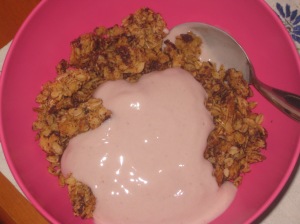 There was one granola recipe in the book but now I had a taste for it, so I did a little digging into the blog and found a plethora of granola recipes to choose from.  The Almond Joy Granola was incredible! Admittedly it was slightly more walnut joy as I had just used most of my almonds in the above granola bar recipe.  The mix of coconut and chocolate with a saltiness from almond butter made a true breakfast delight.  I threw in half the chocolate whilst everything was still warm so it melted into the clusters.  I was starting to get the hang of this granola lark. 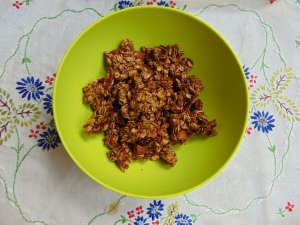 The Gingerbread Granola had a really Christmassy feel to it.  The combination of molasses, ginger and cinnamon gave this a lovely warmth.  I managed to make giant oat clusters that would be worthy of presenting to the granola gods as breakfast.   The downside of using molasses was that everything was brown from the start so it was a little harder to tell if things were burnt or not. 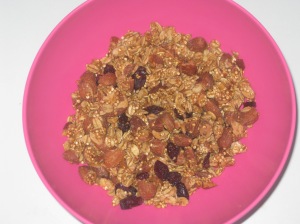 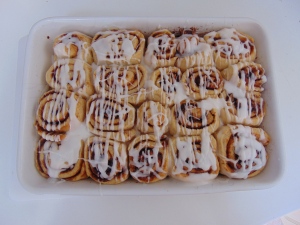 The Cinnamon Snails should have been pretty easy to make.  It turns out that even after spending more than 10 years as a practical chemist I still sometimes struggle to follow a recipe.  This recipe from the blog required 1 cup of almond milk but I had it in my head that I needed 2.  I was pretty puzzled when, after adding the required amount of flour, I still had a sticky mess in the bowl.  After checking the recipe again I saw the problem and managed to get back on course, and what a course it was!  These cinnamon snails were a gloriously sticky and sweet breakfast treat.  My error following the recipe may have left me flummoxed and led to an increase in the prep time, but it did also result in double the quantity of snails.

The second section of the book is appetizers + sides. I generally dipped into this section for lunches.  Regular readers know that Ms HH values good soups in a book, so I made sure to test out a few of the recipes. 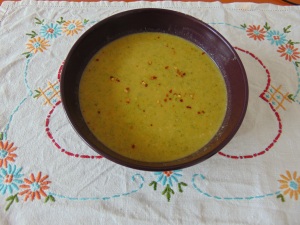 The Creamy Broccoli + “Cheddar” Soup was thick and flavoursome.  There was lots of nooch in here to give it that savoury cheesy flavour and there was a nice bit of sweetness coming from the butternut squash and maple syrup.  It was a really nice vibrant colour and I didn’t completely blitz it, so there was still some good chunks of broccoli and squash in there. 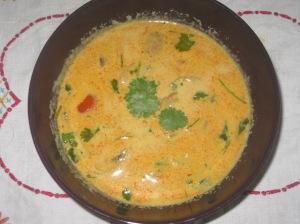 The Coconut Red Curry Vegetable Soup was full of great flavours and had some good heat from the red curry paste.  The coconut milk provided some nice balance and I opted against adding any maple syrup as I figured the coconut milk would be sweet enough.  The soup was light on vegetables though, I added about 5 times the recommended number of mushrooms and double the carrots, but I still think it could have used more vegetables.  For the second serving I threw in lots of rice noodles and it unsurprisngly made a tasty noodle dish too. 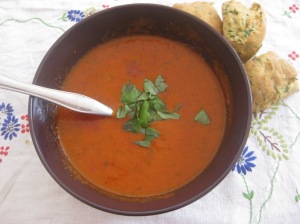 I liked how easy the recipe for the Creamy Tomato + Herb Bisque was. It was pretty much a case of chuck stuff in the pot, blend it and then let it simmer.  No time consuming chopping or frying to be seen.  I was a little wary about throwing coconut milk into my tomato soup but it was fine, adding creaminess without adding a coconutty taste.  I let it simmer for more than an hour (20 minutes was the minimum recommended time) and I ended up with a thick, creamy soup that was packed full of flavour from dill and chilli. 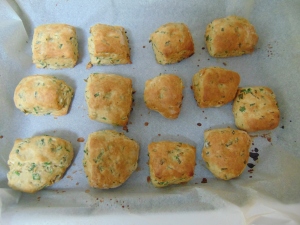 We had this soup with Garlic “Cheddar” Herb Biscuits and they were incredible!  They were like little savoury scones that were very easy to make and packed full of great savoury flavours from the chives and nooch. 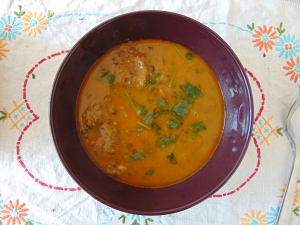 The Simple Curried Carrot + Lentil Soup is actually from the mains section but everybody knows that soups are for lunch.  The recipe recommends using green curry paste but I just used the red curry paste that I already had.  I definitely recommend partially blending the soup as it all seemed a bit watery before that.  It was a really flavoursome soup, most of it comes from the curry so make sure you like your curry paste. 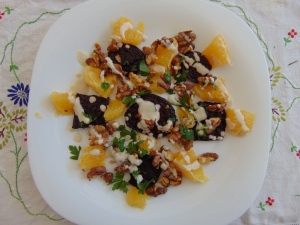 I threw together the Beet, Orange + Walnut Salad with Lemon  Tahini dressing for a lunch one day.  I was mildly concerned when I tried the dressing on it’s own and it seemed a little bitter but it was fine when combined with the sweetness of the beetroot and orange.  There was a bit too much orange in the salad.  The recipe has an equal amount of beetroot and orange and it would probably be better with less orange.  The walnuts added some nice crunch and it was worth making for the visual experience. 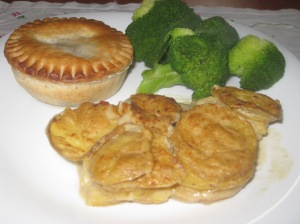 I had spied the Garlic Scalloped Potatoes within moments of looking at this cookbook and knew I had to make them.  I was struggling to figure out what to pair them with and was wondering if I could justify just eating a tray of cheesy potatoes for tea.  I ended up serving them with a Linda McCartney pie and some broccoli. The potatoes were fantastic, it was a great creamy sauce that was bursting with cheesy flavour from all the nooch.  I baked them for about an hour and they were a bit underdone for my liking so I’d recommend baking them for longer. 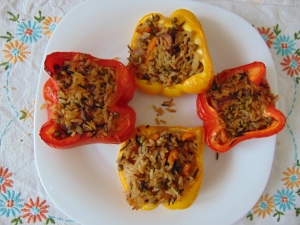 I made this Easy Vegan Fried Rice from the blog and used it as the filling in some stuffed peppers.  I did things a little differently: the book and the blog both suggest baking the tofu without adding any oil or seasoning to it and then tossing it in a marinade.  I didn’t want to take any chances with my tofu not being sufficiently flavoursome so I marinated mine before baking.  Little bits of the marinade charred as the tofu baked and I thought it added great depth to the flavour.

That’s all of the breakfasts and lighter meal – come back next week for some mains and desserts!

This entry was posted in Cookbooks and tagged Minimalist Baker, vegan, vegan cookbook. Bookmark the permalink.

10 Responses to Cookbook of the Month: Minimalist Baker’s Everyday Cooking (Part One)