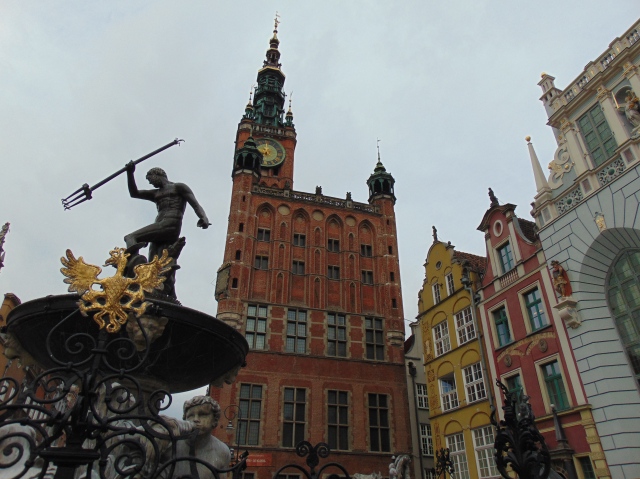 When I wrote about Gdansk after our Easter holiday I mostly noted that we ate at some omni places and we encountered some racist people.  We did in fact enjoy the pretty town centre though, and even visited an all-vegan restaurant, Avocado.  Surprisingly, it was not the best meal we had there though. 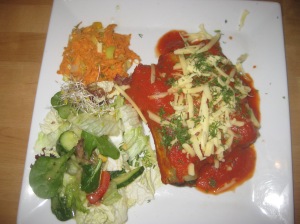 It’s quite far away from the city centre, so I assume it’s intended more for locals than tourists.  But as it was the only 100% vegan place I found, we decided it was worth the trek out there.  We went at about 5pm for an early meal, and found that it was absolutely packed.  We managed to find two seats, but got bashed by everyone queuing up at the counter.  Due to some quick scurrying, we managed to snaffle a corner table instead, but throughout the meal lots of people waiting for their takeaway orders were lurking right by us, which puts me on edge.  The perils of visiting a popular place!

Despite how busy it was, service was still fast and friendly.  There was quite a small menu, which is usually an encouraging sign:  some cutlets (of course), falafel, a burger, and cannelloni.  I was on cutlet overload already, and hadn’t had cannelloni since going vegan, so decided to give it a try.  I think cannelloni sounds much fancier than other pasta dishes, so I was expecting it to be pretty special.  Perhaps my expectations were too high:  it was nice, but it was just pasta, in the end.  The two salad sides were nice and fresh, and the three rolls were stuffed with spinach and in a slightly spicy tomato sauce, which was nice.  “Nice” is the perfect word for it.  I wish the cheese on top had melted.

There was a very tempting cake counter, which might well be where things would have shifted up to “spectacular”, but lurkers were waiting for seats, so we decided not to bother.  Avocado is in a very vegan-friendly little part of town – there’s a place called Hummusland nearby, and it’s a few doors down from Fukafe, a 100% vegan cafe with some beautiful looking cakes.  I’d be interested to see if those two were better options that Avocado.

Back in the tourist hub, our main activity weas walking from the Golden Gate… 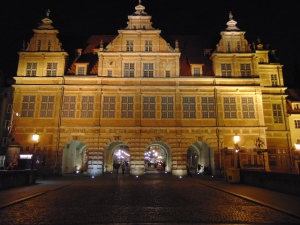 …to the Green Gate (please note, it does not take so long to walk that day turns to night – it’s a casual ten minute saunter).  The gates themselves are pretty…

…and you can admire this in between.  It’s the quintessential European street and square:  tall town houses in nice pastel shades, cobbled streets, grand places of worship.  Not too shabby at all!