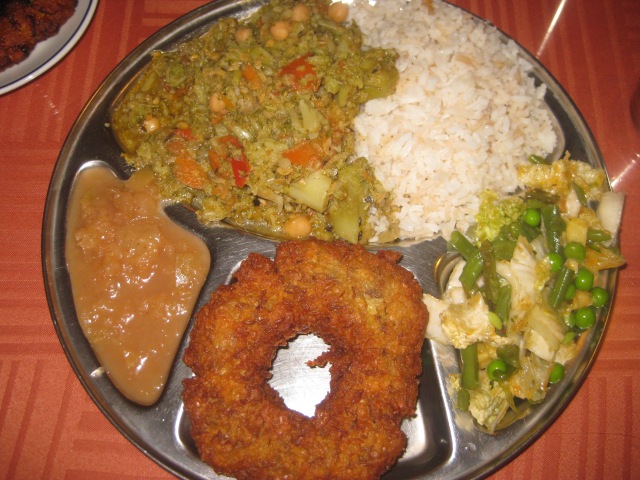 After spending three weeks in the UK over Christmas, I had mixed feelings about coming back to Prague just over a week ago.  It’s been incredibly cold all week (-14C, which is unheard of to a city-dwelling Brit), I’ve diced with death slipping on the icy walkways, and, let’s face it, nobody likes going back to work.  On the plus side, going out for food no longer entails spending about £6 on public transport:  there are lots of good eateries within walking distance, even in this horrible weather.

One such place is Balarama, a cheap and cheerful Indian restaurant about a two minute walk from our flat.  At the bar by the front door you just ask for a medium or large plate (medium is more than enough, even for a glutton like me – all of these photos show the medium version), and if you’re vegan, let them know.

We’ve been three times, and I’d say the food is about 90% vegan.  On our visit this week the only non-vegan dish was a salad, and they actually had a vegan alternative waiting in the fridge.  Another time I got a big fried fritter to replace the non-vegan item, so there’s definitely no missing out.  The staff are always knowledgeable about vegan options, and they always speak flawless English too.

It’s one of those places where they just assemble you a plate of everything they’ve got, so there’s no choosing like in a buffet. Fortunately, the food is usually good and very hearty.  Generally there is a soup, salad and curry with rice.  There’s also usually an apple chutney, though we’re yet to ascertain if it’s meant to be sweet or savoury (it’s got a bit of a spicy kick to it).  And if you’re lucky, there’ll be a little portion of halva included too.

You can pay more for some fried, crispy goods on the side – definitely worth it, in my opinion, as these extras are usually my favourite part.  Bread and papadums are also available. 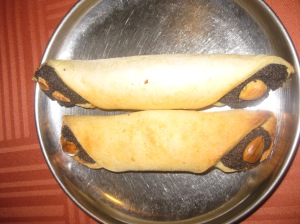 The Czechs generally love a poppy seed baked good, and you can usually find them here in Balarama.  They are vegan (but do check, just in case anything has changed), and are a nice little treat – assuming you still have any room after all that food!

The food isn’t the best Indian food you’ll ever try. I think it’s well-seasoned, but Dr HH feels it’s nowhere near spicy enough.  It’s not food to rave about, but Balarama is certainly enjoyable with its fast, filling food and friendly service.  It’s also cheap: last week we paid less than £9 for 2 medium plates and 2 crispy sides, and we could barely move for the rest of the night. Cheap and cheerful, indeed, and highly recommended for anyone on a budget who wants to fill up as cheaply as possible.

6 Responses to Vegan in Prague: Balarama