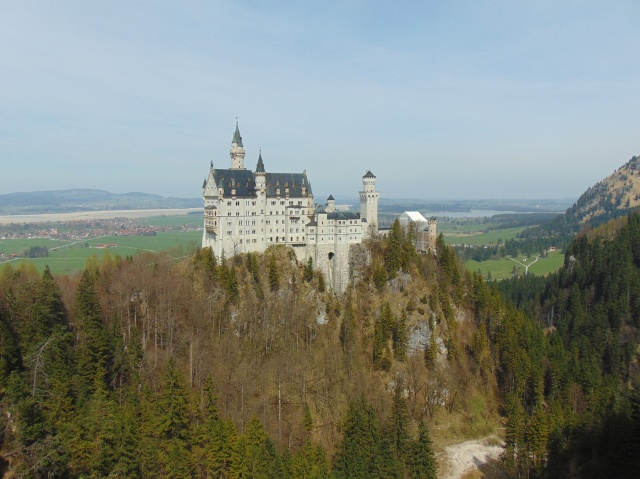 The first few days in Munich involved croissants, hearty portions of mac’n’cheese and incredible desserts.  Let’s see how it continued! 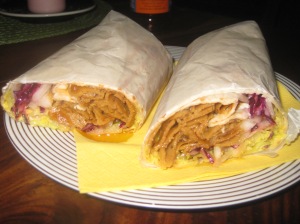 I am constantly on the lookout for vegan kebabs wherever I go, so I was excited to see that Erbils was an all-vegan establishment specialising in falafel, pida and good old kebabs.  Dr HH and I both chose the seitan durum, and it was tasty…but lacking a little of the flavour and bite that I’ve found in some others (such as Vegab in Krakow, or Voner in Berlin).  And the roll was not very tight, which meant it was quite a messy endeavour.  It was fine, but not a spectacular meal by any means.  The Happy Cow reviews suggest that service is not so friendly, but on our visit there were two very friendly servers and we had no complaints (they didn’t speak English, but even without any knowledge of German I think you’d scrape by).

A more exciting spot for dinner was Zodiac Pizza, which we staggered to the next evening after a full day on the go to visit Neuschwanstein Castle.  It’s a little vegetarian pizzeria, with the option of swapping the dairy cheese for this orangey cheese sauce, or paying extra for some vegan mozzarella.  I loved the cheese sauce, it was pleasantly creamy with a very good savoury taste. Also, look at all the topping!  This place is generous.  They have twelve set pizzas (one for each sign of the zodiac), and an option of building your own.  Oh, and a few salads, if you’re into that sort of thing.

I got the widder, which I believe is Aries: seitan, mushroom and leek.  It was excellent.  Besides the generous toppings, I was also impressed with the extremely thin and crispy base – no sloppiness here.

There were no desserts on the menu, but the staff told us there were two options, both vegan:  chocolate mousse or panna cotta.  Of course, we got one of each.  They were lovely elegant desserts, as you can see, served with chocolate shards.  The panna cotta was creamy and good, with a very tart fruity topping.  The mousse was the real highlight though:  so airy, light and flavoursome.  Zodiac was a last minute addition to our holiday itinerary, and I’m really glad we swung by.

We had one more excellent breakfast in the works, courtesy of Rebella Bex Cafe, a cafe connected to a yoga studio.  It has a lot of large tables for sharing, which always make me anxious as a typically anti-social Brit, but happily there weren’t too many other people there.  It looked like a great spot for lunch too (the burritos looked sensational, the cakes gigantic), but we were focused on breakfast.  We got a couple of hot chocolates, which were wonderfully rich.  The server recommended coconut-rice milk, which added a lovely taste.

And of course, we got the pancakes for breakfast. For €5.90, they were much bigger than we were expecting (in general it was a cruel blow going back to western European prices after spending so long in the dirt-cheap Czech Republic).  And they were delicious to boot!  The pancakes were fluffy and pillowy, and were served with artfully arranged fresh fruit, apple sauce and maple syrup.  I’d devour this plate again right now if I could! 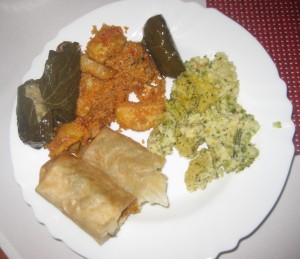 We paid a similar price for our lunch, too.  After a morning pottering around the Neue Pinakothek art gallery, we made the short walk over to Ümis Cafe, a Turkish vegetarian and vegan spot.  The menu had a whole page of vegan dishes, but they cost around €16, so we opted for the €7 buffet instead – the server helpfully explained which dish wasn’t vegan.  It was quite a varied plate of food, and there were some good flavours, but it was unspectacular.

The dessert counter was a different story though!  We shared this nougat tart, and it was unbelievable. The pastry was really rich and crumbly, and the filling was chocolatey and sweet.  I definitely couldn’t have managed this by myself, but it was a great decadent treat to share.  Vegan options aren’t marked, but the staff can fill you in – there seemed to be lots we could try.

We also grabbed a couple of doughnuts for the bus ride home the following day.  When planning a holiday, the first two things I google are “vegan donuts [city]” and “vegan croissants [city]”, so these had definitely been on my radar.  They were better than I’d expected, largely thanks to something I hadn’t been expecting…

…the chocolate filling!  I’ve never seen filled ring donuts before, but I hope this catches on quickly.  I probably wouldn’t return to Ümis for the savouries, but I’d be all over that dessert counter again.

And our final meal in Munich was at Gratitude.  This was another late addition to the itinerary, mostly because the word gratitude, along with ‘authentic’, has been devalued by its overuse by inspirational Instagrammers.  But this place was good.  We arrived a couple of minutes after the 6pm opening and it was already filling up, so online booking would be a good idea.  It’s quite bright and airy at the front, darker and atmospheric further back.  The menu is only in German, but the staff spoke perfect English.  For starters there is a selection of tapas, then four main dishes and a cheesecake of the day.  We skipped the starters, and both ordered the grilled avocado dish.

There was a lot going on, and it all worked together to create a perfectly balanced dish.  You can probably see the bright green avocado there, grilled around the top.  It’s sitting on a little lake of hummus and topped with some tasty salad including cherry tomatoes and corn on the cob.  There’s also a poddadum there, which was nice but perhaps unnecessary, and two triangles of panko-coated fried tempeh:  they were incredible!  The orange sauce of ginger and sun dried tomatoes was just divine.  All in all it was one of those dishes you just don’t want to end.

But end it did.  And we decided to see if dessert was just as good.  It certainly didn’t disappoint!  It was a chocolate cashew cheesecake, which was creamy and rich.  It was served with a zingy lemon sorbet, some tahini sauce and a little heap of chocolate, nuts and seeds.  Again, it sounds a little busy, but it was perfect.  Overall, this was probably the best meal of the holiday (though Bodhi gives it a good run for its money). 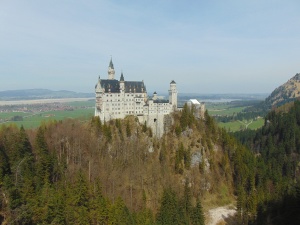 As for what to do in Munich – the main reason we visited was to take a day trip to Neuschwanstein Castle.  It’s a two hour train ride, followed by 10 minutes on the bus, and about thirty minutes walking uphill, but it’s definitely worth it.  Even if you don’t pay to go in, you’ll still marvel at the outside, and the surrounding scenery.

In the city itself we spent a lot of time wandering around the English Gardens, took in a show at the theatre (you can get €7 standing tickets pretty easily – you get what you pay for, but it’s a nice experience), enjoyed the town hall with its dancing clock, and went to a gallery.

There are quite a few art galleries in the city, but we chose the Neue Pinakothek because that’s where they keep the Impressionists.  We got to see sunflowers, waterlilies, and much more.

Munich exceeded my expectations as a vegan destination:  there were lots of options, though perhaps more vegetarian than exclusively vegan, unlike Berlin.  The breakfast and dessert scenes were excellent, which is always important to me in a holiday destination (or place to live, of course).  As wonderful as Munich was, I have to say, Berlin still has my heart!