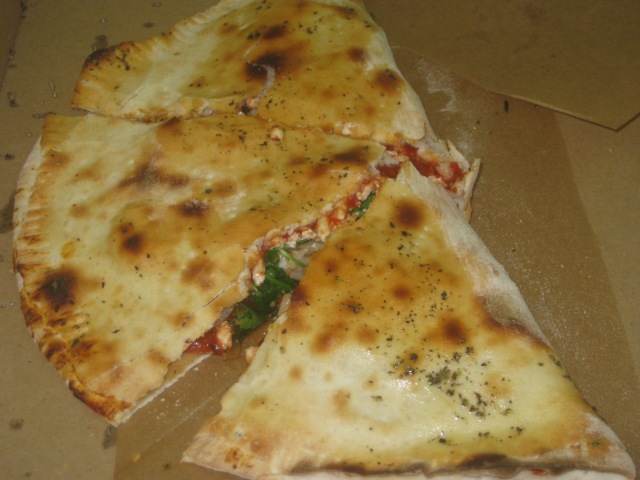 Yet another newcomer on the Prague vegan scene, and this time it’s a takeaway!  I was expecting it to be a colourful, plastic kind of fast food joint, but far from it:  there were big windows, wooden tables, recycling bins.  It’s definitely a vegan place!

The food is fast and delicious, and available either to takeaway or eat in.  On our first visit we’d been planning on not sticking around, expecting it to be short on seating, but being so pleasantly surprised we grabbed a table and waited.  The menu consists of six kinds of burger, seven kinds of pizza (also available in calzone form, called kapsa), and a few side dishes (falafel, coleslaw, chips or onion rings).  Dr HH and I both ordered calzones, in tribute to Ben Wyatt, everyone’s favourite calzone enthusiast.

Dr HH got the Mexican calzone, and deemed it not spicy enough despite the presence of pickled chillies.  He liked the creaminess of the cheese, and found the pizza well-stuffed and tasty.

I got the artichoke one, as it’s my opinion that there is no fancier pizza topping (or filling, in this case) than the artichoke.  Of course, it was delicious!  I was also a big fan of the cheese.  I was not such a fan of the calzone being cut into three, as it made the middle piece extremely difficult to eat without the filling oozing out everywhere, but sometimes you just have to get a bit messy. 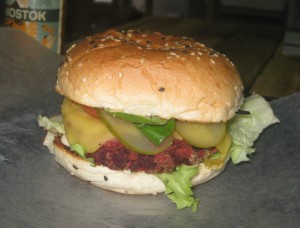 On our next visit, we transferred our attention to the burger menu.  Dr HH chose the beetroot burger, because he was hoping it might be robi (a mock meat made from beets that we’ve only encountered here in the Czech Republic).  It wasn’t robi:  the patty was made with beetroot, as you can probably deduce from the colour.  He enjoyed the integrity of the patty, and was especially pleased to find gherkins in there too.

I went for the falafel burger, which tasted beautiful but was a little dry, unfortunately.  I think that’s always the risk with a falafel patty.  But I was happy to see it was served with cheese, and the bread was really good too.  In the end we agreed that while the pizzas were excellent, the burgers were just fine, and we’ll order accordingly next time. 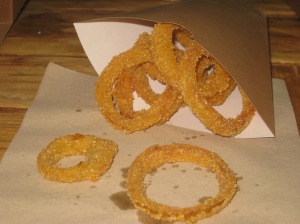 There are a few side dishes available:  falafel balls, vegetable fries and onion rings.  The onion rings were nice, but I was put off the fries when I took a big bite of what I’d guessed was parsnip and found that it was celeriac.  Noooooo!  I didn’t trust any of them after that.

There were also slices of raw cake available and they looked really good – unfortunately we just didn’t have room though (and had an uphill walk home to consider).  Maybe next time!

9 Responses to Vegan in Prague: Chutnej