Cookbook of the Month: A Vegan Taste of Greece 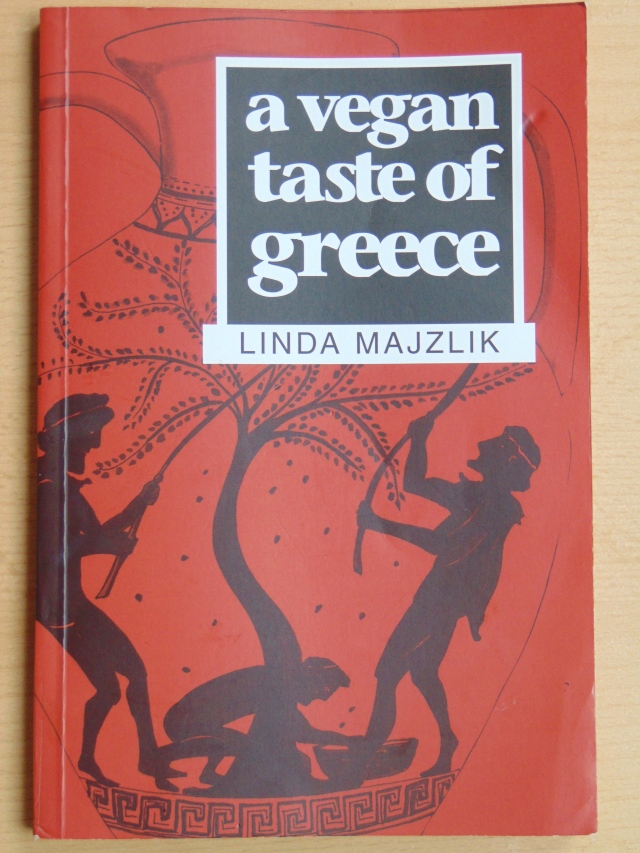 A Vegan Taste of Greece is the third book I’ve tried from Linda Majzlik’s series, and I have to be honest and say that I’m not sure I’ve given it a very fair trial.  I started a new job in September and have been quite busy with that and getting into my new routine, so I haven’t had quite as much time as usual for poring over my recipe books. Still, I managed eleven new dishes this month, and here they are!

The aubergine and orzo soup was really simple and tasty.  I used a tin of tomatoes and cut down on the stock a little, making it a bit thicker and stew-like, which is always a good thing in my opinion!  It was a nice, but unremarkably-flavoured soup. 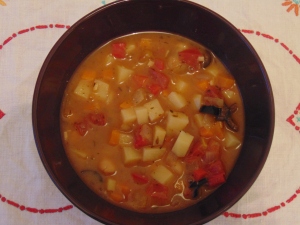 The fassolada had a lot more going on!  Butter beans, potatoes, vegetables, olives:  quite the party. I made this just as the weather was turning autumnal, and it really hit the spot. 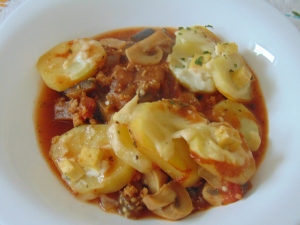 Of course I had to try the moussaka.  I used a tin of tomatoes rather than fresh ones, and used feto cheese on top, but otherwise followed the recipe.  The dish was really flavoursome and the aubergine cooked beautifully. Alas, the potato slices were a touch too hard – I always find it difficult to balance the thinness with the appropriate cooking time, they always end up either mushy or underdone.  Still, I’d recommend it.

The aubergine baked pasta was lovely. It had a good hit of fennel seeds,which made it quite different from the other dishes we’d been eating.  I added more pasta to fill us up, and I blitzed nooch and pecans to make a parmesan crumb to throw on top, which I’d highly recommend! 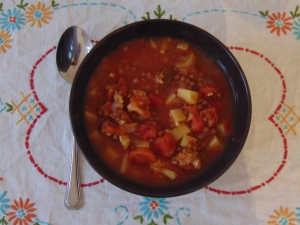 The lemon-flavoured lentil stew was one of my favourites. I added a little extra stock to make it a bit more soupy, and used tinned rather than dried lentils, but kept everything else the same. I loved the little bits of broccoli, and the delicious lemony background.  I’ll have this again!

I was a little underwhelmed by the pea and orzo salad – until I added my precious feto and it got extra tasty!  I ditched the cucumber, but I don’t think that had a detrimental effect on the appearance as there was already some green in there. It was unspectacular. 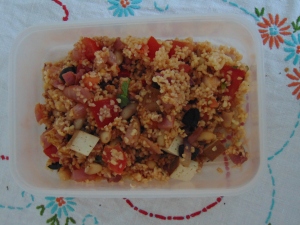 The bulgar, bean and walnut salad looked a little light, so I added some smoked tofu and olives to give it some more flavour.  Even without the additional treats, it was really delicious and had much more taste than the other salad.  A very good choice!

I was a little nervous about trying the sesame cookies, but I had all the ingredients in so I thought it made sense to give them a whirl. I worried they’d be a bit savoury, and truthfully they could do with just a touch more sugar, but they were really lovely!  The texture was great too.  I’m not sure this was the shaping I was meant to achieve, but who really cares?! 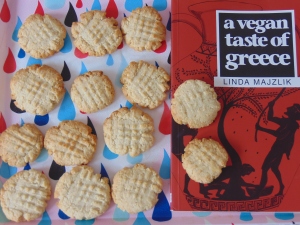 The almond cakes were actually cookies – like all of Linda’s cookies, they weren’t too sweet and had the perfect texture.  I didn’t have any cognac in, of course, so I just used vanilla essence. I was very happy with the result. 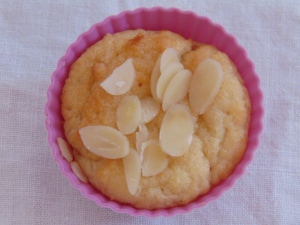 I made the yoghurt and almond cake in cupcake form, for ease of popping them in lunch boxes.  This recipe was a big hit!  The sponge was light and nutty, and I liked the sweet syrup gluing the almonds on top.

And that’s it!  I will definitely turn again to the bulgar salad, lemon stew and yoghurt cake, and hopefully one day I’ll have time to explore the book a little more fully.

My usual complaints about this series stand (no pictures, no chat, not as user-friendly as most modern cookbooks), but I continue to find them very reliable for a quick and flavoursome meal.  I managed to pick up two more from the series second-hand recently, so there’ll be more from Linda in the near future!

This entry was posted in Cookbooks and tagged A Vegan Taste of Greece review, vegan cookbook review. Bookmark the permalink.

9 Responses to Cookbook of the Month: A Vegan Taste of Greece