Cookbook of the Month: VeganMoFo 2017 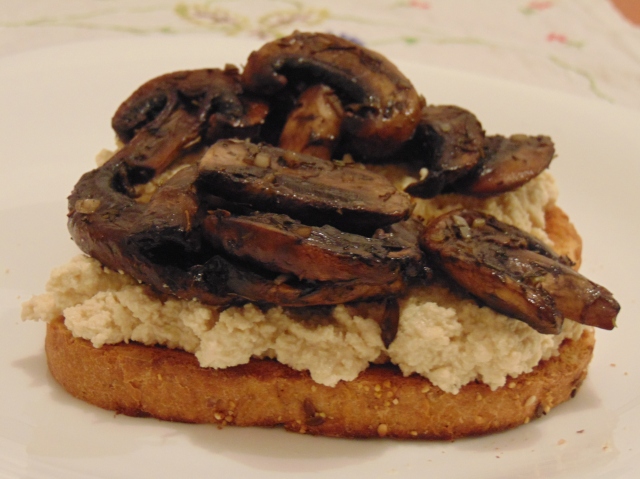 VeganMoFo is finished for another year, and I am exhausted!  It’s always my favourite month of the year, but I can’t deny that I’m looking forward to having some free time again.  As always, I’ve discovered some fantastic new blogs and Instagrammers to follow, checked in with some of the regular crowd, and marvelled at some of the recipes people have shared!  Like last year, I’ve done a little VeganMoFo cook-along, which will replace my usual Cookbook of the Month post.  Take a look at everything I made!

Brunch first:  I’m crazy about a good potato-chorizo hash, so I had to try this one from Kelly at Vegga.  I followed her suggestion of par-boiling the potatoes, and it worked a treat.  I swapped the green pepper in her recipe for mushrooms, because, well, it’s mushrooms!  It was a really tasty dish. 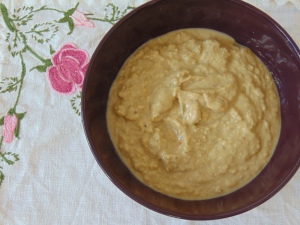 Walks, Talks & Eats is one of my favourite blogs for recipes (you’ll see another in this post) and is worth checking out at any time of the year.  I couldn’t resist this chickpea tahini soup, which I sold to Dr HH as”hummus soup” – it has chickpeas, lemon juice, cumin and tahini, so it’s basically liquid hummus!  Unsurprisingly, given that ingredient list, it was delicious. I didn’t produce a very visually appealing colour or texture, but the taste was perfect.

I also made this curried root vegetable bisque from Not Fun at Parties. Unfortunately mine did not achieve the glorious yellow shade of the original, but the taste was spot on! The recipe called for some agave syrup stirred through at the end, but I thought the soup was already quite sweet so I skipped it.  It was very finely balanced between sweet and spicy with the curry powder, root veg and coconut milk. This is the kind of warming soup I just love at this time of year!  It was one of the best soups I’ve ever had – I never wanted to reach the end of the bowl.

The pumpkin and black lentil soup from AfroVeganChick was another good one, though I used roasted butternut squash instead of pumpkin, green lentils instead of black, and added some garam masala along with the cinnamon.  It was really autumnal and thick, and I would definitely recommend it. 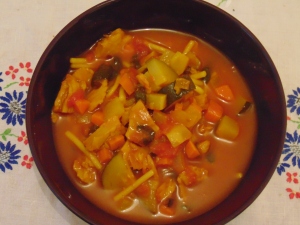 From Gonna Go Walk the Dogs, I made this Moroccan vegetable soup – or, as we called it, “Everything soup”. It contained vegetables, pasta, and mock meat, which is pretty much everything as far as I’m concerned!  It was very easy to make, just a case of chopping and chucking it all in a big pot.  Unsurprisingly, it was delicious!  I would have liked a kick more spice, but Dr HH was very satisfied with the turmeric and saffron combination here. It was really filling, and coming across a chicken chunk was a real treat!

And my final soup: Dianne at Dianne’s Vegan Kitchen shared the recipe for this curried cauliflower cream soup.  It was very easy to make, as it uses bought red curry paste, and this time I thought it was perfectly seasoned but Dr HH found it “a bit intense”, whatever that means.

Back on the first day of VeganMoFo, Sarra and Mike of Fake Meat & True Love made these exciting hummus-crusted tofu and vegetable tacos, and I’m not the kind of person who can turn down a combination of hummus and tofu.  It was really good, and I’m already pondering what salads I can use it in as well. Alongside this delicious concoction, I also filled the tacos with roasted broccoli and potato, and splashed on some hot sauce.

Also on day one, Jess at Ichiban Vegan posted these herbed mushroom and tempeh veggie burgers.  The recipe should make 5 but I only got two!  On reflection, I have to admit that I could have made them smaller. I regret nothing though!  They were good and meaty and packed with flavour.  I’ll make them again. 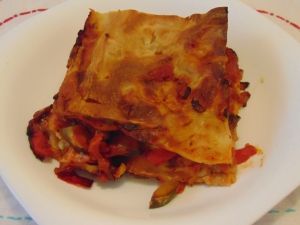 One of my favourite prompts asked participants to improve on their worst catered meals.  It was an easy improvement for Emma at Walks, Talks & Eats because her worst dish was lasagne made with slices of celeriac instead of pasta.  Yes, you did read that correctly.  I decided to have a go at her roasted vegetable lasagne, and I think we can safely say it was better than the celeriac one!  Clearly I am greedier than Emma, because I beefed up the vegetable sauce with a block of crumbled tempeh and a second tin of tomatoes.  The filling was lovely, but the real highlight was the cheesy sauce made from silken tofu.  Not only was it really delicious as it was, but it also mixed into the tomato sauce making that creamier and more delicious too.  Majestic!  Dr HH declared it the best cheesy lasagne sauce he’s ever had, and I’m inclined to agree.  We’ll be factoring it into all our lasagnes from now on.

Emily from Vegans Need Sauce  chose tempeh as her secret ingredient on day ten, which was funny to me as I live next to a supermarket that often doesn’t have onions, broccoli or chickpeas, but always has packets of smoked tempeh.  So of course I had to make her tempeh marinara.  It was so meaty and flavoursome, and really quick to make.  Definitely a good one to have up my sleeve!

Two Happy Rabbits is a blog I only discovered this VeganMoFo, and I’m so happy I did – they posted mouth-watering recipes every day, most of them cooked in a tiny kitchen in their campervan!  I got Dr HH to make these pasilla chili braised mushroom tacos with walnuts and dill, though he had to improvise a little – pasilla chillies aren’t a thing here, and he couldn’t get any fancy mushrooms.  But the final product was a huge hit!  The tacos were really meaty, and the walnuts were a wonderful addition, bringing both texture and flavour.  We were very impressed.

From the same blog, I also tried this mushroom and tofu ricotta tartine.  Doesn’t that sound fancy?  Again, I had to use bog standard mushrooms. It was a nice dish, but the flavour was all in the mushrooms.  The ricotta would be nice in a lasagne or other dish, but it needed a bit more seasoning in order to stand alone.

Jennifer at One Raw Bite was posting all-American cakes, and one of her early contributions was this applesauce cake.  Applesauce is quite an elusive ingredient in the UK, but you can find it everywhere in the Czech Republic, so I decided to give it a go. It’s very easy to make – I threw it together after work one evening. I made it into cupcakes instead of one big cake, so it’s easier to take for packed lunches – just reduce the cooking time if you do this.  This cake combined apples, raisins and cinnamon, so as you can probably imagine, it was delicious.

And another recipe from Ichiban Vegan, this time these chocolate oatmeal protein squares.  I don’t own any protein powder and refuse to buy any on the grounds that it costs a fortune and plants contain protein anyway, so I eliminated that from the recipe, but chucked in some ground hemp seeds instead.  Brace yourself for a shocking statement:  I thought these were a little too chocolatey!  Instead of adding chocolate chips, next time I’ll throw in some juicy cranberries.

There are good recipes to be found on Instagram too, such as this chocolate brownie from @ambereatsveg.  It was quick and easy to make, and my only change was to microwave the peanut butter to get it softer and easier to mix in.  The courgette in the recipe kept the sponge nice and moist, but the flavour was all chocolate and peanut. I also made this in cake cases, per Amber’s suggestion, which reduced washing up nicely!

As if that wasn’t enough sugar, I also made these chocolate-covered shortbread-style cookies from Wing It Vegan, who was a latecomer to VeganMoFo but provided an excellent range of cakes and cookies to serve just two people.  Perfect!  These cookies had the best texture, and I loved the chocolate coating. I’ll make these again, but I might double the quantities next time – I can’t limit myself to just six! 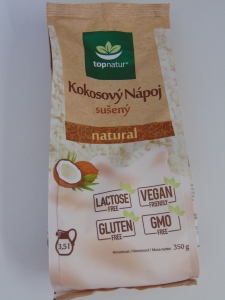 I always find so many creative new ideas during VeganMoFo, and one of the best I encountered this time was Claire from Coastal Vegan‘s recipe for instant hot chocolate mix.  I have really missed instant hot choc since going vegan, and I was happy to see that the recipe contained vegan milk powder – something which is also available in our aforementioned terrible supermarket!  In the end, Dr HH actually came home from work one night with a packet of coconut milk powder, rather than the soy one available closer to home, so I used that.  I feel like the word “gamechanger” is overused these days, but here it was definitely applicable. I’m going to have a constant supply of this stuff!

And that’s it!  There are a lot more recipes I still want to try, but I’ve been limited by time/lack of kitchen equipment/terrible supermarkets.  I really enjoyed trying these recipes and reading along on so many great blogs, but I’m sure we’re all ready for a little break now! I’ll be over here sipping my instant hot choc!

What were your favourite recipes from VeganMoFo? Any you’ve already tried, or bookmarked for later?

This entry was posted in Cookbooks, Vegan Mofo and tagged cookbook of the month, veganmofo, vgnmf17. Bookmark the permalink.

13 Responses to Cookbook of the Month: VeganMoFo 2017