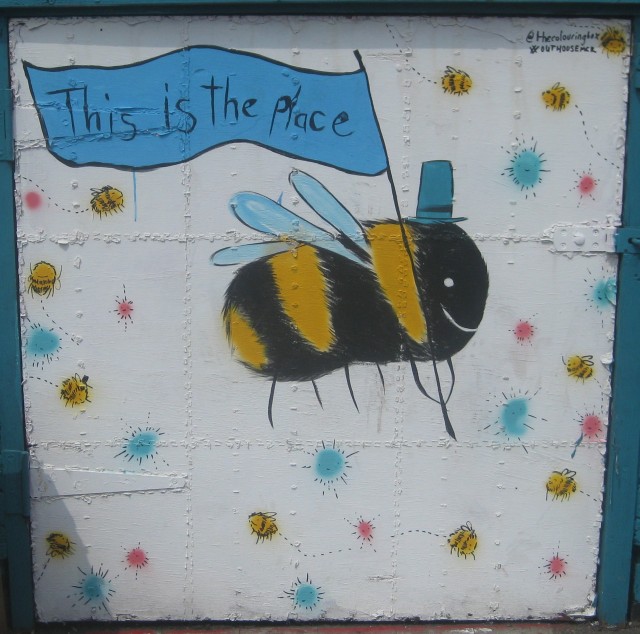 The Northern Quarter is one of my favourite parts of Manchester.  It has it all:  independent shops, ever-changing street art, and plenty of vegan options!  Trof NQ is just one of the omni places that is happily catering to vegans, so we decided to check it out over the summer holiday. 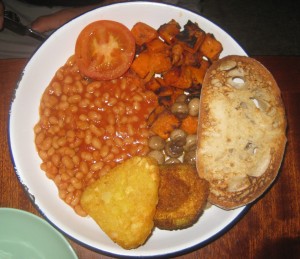 Dr HH had the full vegan breakfast, and had one obvious complaint:  that tomato you see was stone cold.  Not even grilled!  (Actually, there was also a second complaint:  no spread on the toast.)  Besides that, he was very impressed. Under the hash brown you can see a breadcrumbed avocado, which was just sensational!  Everything else was good too, though a touch under-seasoned for his taste.  Even though there were no meat substitutes, he was very full and satisfied.

I got the hash, which combined sweet potato, mushrooms, spinach and cashews (you can add vegan black pudding for an extra £2).  It was perfectly seasoned, with a healthy dose of chilli and some fresh herbs too.  It was also good and filling. 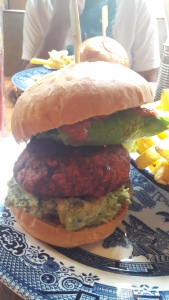 There are also four lunch/dinner options:  a vegan burger, sweet potato falafel, a balti and a superfood salad. Of course, I got the burger – excuse the terrible photo, clearly I was too excited.  The patty was made with beetroot, white beans and cashews.  Not only was it really hearty and flavoursome, it was also a beautiful bright pink on the inside!  There was plenty of guacamole and some spicy sauce on the top bun, making it extra delicious.  And the portion of chips was huge!  This is highly recommended, and not even just as a back-up for when you’re with meat eaters/vegetarians – even a group of vegans (what is the collective noun for us?) would be perfectly satisfied.