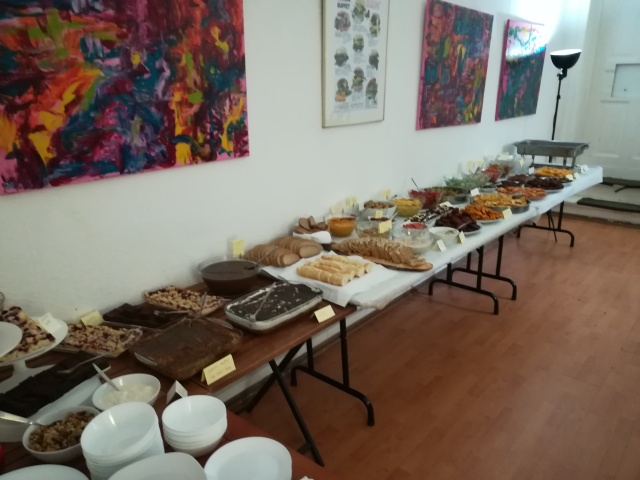 Following a month of intense cooking and blogging, November’s MiniMoFo theme of lazy is more than welcome!  I’m not sure how well this post really matches the theme – a long, leisurely brunch feels lazy and indulgent, but at the same time, someone is doing a lot of work!

For MiniMoFo, I’m taking you to Berlin.  There are many great things about Berlin:  the museums, the street art, the history. But more importantly:  the all-you-can-eat vegan brunches.  Oh yes, that’s brunches, plural.  There are a number of them available at weekends, and they’re exceedingly popular.  Last year we went to Kopps (boo!) and Alaska (woo!), and this year we tried two different ones:  playing with eels and Viasko. 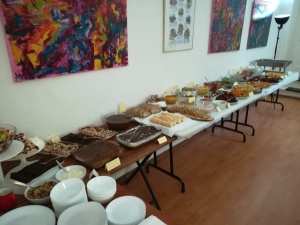 playing with eels is predominantly a catering company – they only serve food from their cafe on a Saturday when brunch starts at 11am.  It’s a nice cafe with mismatched furniture and fun art work, and when we were there every table was booked, so make sure you get a reservation – I did so via their website. 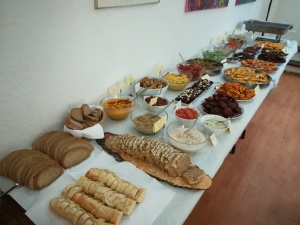 We arrived at 11am on the dot, and were the first people to the buffet.  But don’t worry, we didn’t eat it all!  It was such as incredible spread – various kinds of bread, numerous dips,and a whole host of vegetable and grain concoctions.

Apparently I was too excited to take a steady picture of any of our plates – this is the only passable one, though you can be sure we had more than just the one helping!  We loved all the different spreads we tried (including a couple of butters that were wonderfully rich and creamy), and the pasta dishes were nice too. There were some aubergine slices, along with an aubergine and lentil dish, which were both beautiful. Dr HH was particularly taken with some spicy, peanut buttery dish he stumbled upon, and kept trying to force me to try some as well!

There was so much choice, and some really creative dishes – there was nothing here that I looked at and thought, ‘Meh, I could have that any old time.’  Clearly a lot of effort went into it.  Our only complaint was that everything was cold, even the dishes that would have been better warm, but as you can see from the picture of the full table, it was quite the spread, so it would be difficult to keep everything hot.

On to the dessert section, which was rather spectacular. There was some granola, yoghurt and chocolate cream, plus fruit salad (yawn – we kept things as unhealthy as possible with just granola and chocolate cream!).  There were some little chocolate brownie squares and a fruity streusel square, both of which were nice.

Best of all was the rice pudding, which was so comforting and beautifully spiced – even though it wasn’t warm, it felt extremely warming!  And finally, the Bounty pudding:  chocolate sponge, a creamy coconut layer and dark chocolate on top. I wish I’d had room for more helpings of this.  In fact, maybe I’d go back and just eat my money’s worth of rice pudding and Bounty pudding!

It was €13 all-you-can-eat, and everything was just wonderful.  We didn’t really need to eat again for the rest of the day! I loved the atmosphere and decor too, and it seemed like a very friendly and relaxing place to while away a few lazy Saturday hours. 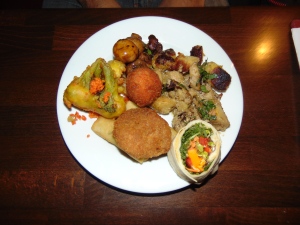 The next day we went to Viasko – again, we had a reservation and it was pretty busy, so I don’t think it would hurt to do the same.  Also they have a sign on the door warning that people in fur and other animal products won’t be welcome (or even just materials that resemble fur), so be careful if you’re wearing a fake fur or fake leather coat!    We ended up sitting in a kind of cavern downstairs from the buffet, so the light wasn’t great.  The buffet table itself was far too crowded for pictures, more’s the pity, so you’ll just have to see what we ate.

The best thing about this buffet was the deep-fried stuff!  As well as battered veg, there was also a crispy spring roll and two breadcrumbed meaty chunks.  We also had some lovely marinated mushrooms, a pretty bland little vegetable wrap, and some gnocchi which was actually the most flavoursome dish on offer!

For round two, we focussed more on the meat and bread side of things. Here we have a little Caprese salad, some tasty olives and antipasti, one of several dips on offer, and a nice slab of seitan. Alongside the regular crusty bread roll is a salty pretzel roll, and I probably don’t need to tell you that it was a real highlight.

Dr HH is an unstoppable eating machine, so he also went for a third plate with some baked beans and sausages, tofu scramble (both of these were warm), more mushrooms, ground seitan and some tempeh.  He was very happy with the seasoning and temperature of everything here! 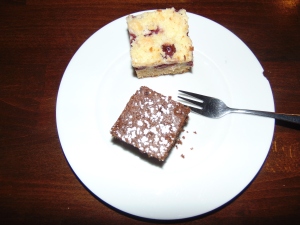 Eventually we were ready for the sweets, which were less exciting than the day before.  We had a little chocolate cake and another fruity streusel square, both of which were nice but unremarkable.  The real highlight was the pancake though!  It was good and pillowy, and cut into manageable pieces.

Viasko was a wee bit more expensive at €14, and it lacked the relaxing atmosphere as we were in a little cavern -it was quite dark and loud.  The savouries were delicious though.

As you can see, we were extremely well-served by these two vegan brunches and would happily return to both! Ultimately I think we both agreed that the choice at playing with eels was better and much more inventive, but the food was kept warmer at Viasko.  For anyone with a sweet tooth, proceed straight to playing with eels and dive into those puddings!

15 Responses to MiniMoFo: A Tale of Two Berlin Brunches