For our first ever holiday together, Dr HH and I travelled to Brighton for VegFest and started our noble tradition of eating as much as humanly possible on our adventures. Over four years after that first trip, we were back in Brighton a few weeks ago revisiting our favourite culinary haunts. But it might as well have been our first ever holiday together, because it turns out that I don’t even know Dr HH at all. He has harboured a dark secret for four and a half years. Are you ready to hear it?

He likes to mix spread into baked beans.

I can’t tell you how many full English breakfasts we’ve shared together over the years, and never once had I seen him commit this abominable act. But he did it while tucking into this breakfast at Wai Kika Moo Kau. After buttering (spreading?) his toast, he tipped the leftover spread into the beans and just mixed it in like it’s the done thing. Faithful friends, is he insane, or am I? And who knows what other hidden horrors I have yet to uncover about my beloved Dr HH? At least I know he doesn’t applaud when aeroplanes land. 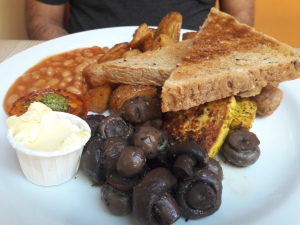 I don’t even know if I can return to the task at hand and review our breakfast at Wai Kika Moo Kau…but I’ll try. This was the vegan full English, which received a solid review from Dr HH (if we can even trust his opinion on anything any more). He was delighted with the generous helping of mushrooms and potatoes. Roast potatoes are always a winner, after all. He also enjoyed the beans and toast, and the sausages (pretty sure they were Linda McCartney’s), but was rightly disappointed to see a tomato on there. Surely nobody likes that tomato half? At least it was made more exciting by the pesto on top, but obviously it wasn’t the most exciting element. All in all he said it wasn’t very original, but the mushrooms and potatoes were top notch.

Come to think of it, it’s possible that the spread and beans move was a trick to try to put me off my own breakfast so he could swoop in and devour it. No such luck, Dr HH – I will not be deterred from vegan pancakes!

I’ve had these at least once before on our previous trips to Brighton, and they were actually better than I’d remembered. Firstly, what a generous portion! And secondly, they were just really good! Thick, pillowy  pancakes that left me very full indeed, served with a veritable bucket of maple syrup! That’s my kind of breakfast.

Wai Kika Moo Kau is a vegetarian cafe with solid vegan options (and I believe all vegan cakes), and still extremely popular, so get there early if you have your heart set on a good breakfast. Our general consensus was that the pancakes were the better option of the two – and ordering them will prevent you from discovering any shocking truths about your dining partner!