It is no secret that I love Terre a Terre, the fancy meat-free restaurant in Brighton. I first visited it about 3 months after going vegan, and it was the first time I had really impressive, fancy vegan food. It gave me such motivation and hope about the vegan adventure ahead. And the terre a tapas sharing plate has been the stuff of my dreams since I first laid eyes on it over four years ago. 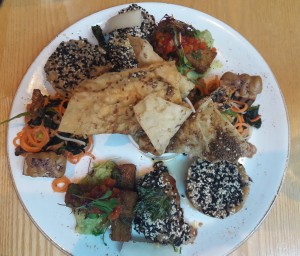 This July was my third visit for dinner (plus one trip for afternoon tea), and Dr HH and I had decided well in advance that we were getting the sharing plate again. Obviously we made the right decision. This dish can be ordered vegan or vegetarian, and includes an assortment of bites based on other items on the menu. It’s a great way to try lots of really delicious things, and it’s been slightly different each time we’ve been.

This time we got a really tasty aubergine dip with well-seasoned, puffy crackers. The polenta chips with guacamole were surprisingly quite bland and unexciting, but the melty aubergine tahini dish with sesame seeds was absolutely sublime. There was also a carrot noodle and edamame salad with chestnut puree tofu: I’m not crazy about chestnuts so I found the puree too sweet, but the salad was really delicious – and it’s not often I say that! Of course, the highlight of the platter was the Korean Fried Cauliflower. It consisted of sticky sauce, crispy batter, some sesame seeds, and beautifully tender cauliflower – we’ve never cooked it that well at home, and we make buffalo cauliflower a lot. It was just incredible! 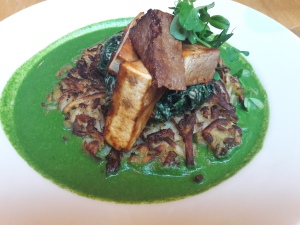 Unfortunately I think we made some uninspired choices on our mains. On our previous visits we’d steered clear of the rosti section of the menu, but this time, perhaps inspired by Dr HH’s marvellous breakfast at Gallery Cafe earlier in the week, we both went potatoey. I got the rosti revisited: a very large rosti sitting in an unspecified green sauce, topped with lovely smoky tofu. The tofu was really flavoursome, but the rosti didn’t hold together perfectly, probably due to the fact that it was swimming in sauce. It was all just a bit weird, to be totally honest. 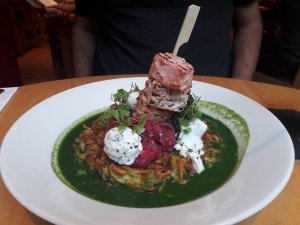 Dr HH opted for the aloo sailor: a similar rosti (possibly with added spices), presumably the same sauce (we were sampling from each other’s dishes but just couldn’t figure it out), some tandoori smoked tofu which was not as flavoursome as he’d hoped, and some coconut yoghurt raita that was just a bit too sweet to work pefectly. I actually thought the tandoori tofu was really delicious, and I might have preferred his dish were it not for the sweet raita. 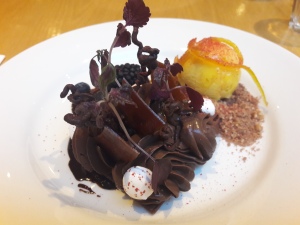 Things got back on track when we ordered dessert. We each got a snap, crackle, choc, and my top tip to you is: get this to share with someone. It is insanely rich, and I almost died in my determination not to miss out on a single bite. It was worth the subsequent bellyache though! It was a very rich chocolate mousse, on an insanely thin base, with a  tasty shortbread crumb, orange sorbet, tiny meringues, and chocolate twists and shards. It was one of the most indulgent, decadent desserts I have ever laid eyes on, and I can’t recommend it enough – it has already claimed its space in my ‘Top 5 Desserts‘ list.

Truthfully then, we were a little disappointed with our mains, but mostly blame ourselves for straying from the more exciting parts of the menu – there were some other really tempting and creative vegan options to explore as well. And I really can’t complain about a meal involving that tapas starter and one of the all time great desserts. Here’s hoping we make it back next year for another round!

9 Responses to Vegan in Brighton: Terre a Terre (Again)