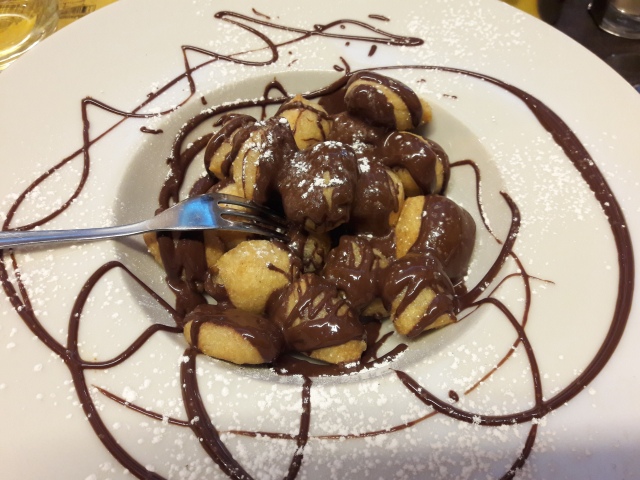 When I was looking for food tips ahead of my trip to Italy last summer (my theme for last year’s VeganMoFo) and our weekend in Rome this winter, I found some very distressing advice.

“You can get spaghetti with tomato sauce anywhere!”

“There are so many fruit sorbets!”

I don’t know who these losers are, but I don’t go on holiday to eat plain pizza and pasta followed by a boring old fruit sorbet. I want some real food! And that is exactly what I got at Rifugio Romano, an omni restaurant with an extensive vegan menu covering about 4 A4 pages of starters, primi, secondi, and pizzas.  They even have vegan desserts and labelled vegan wines! This place is close to Termini train station and was extremely popular with tourists, but it wasn’t overpriced or tacky. 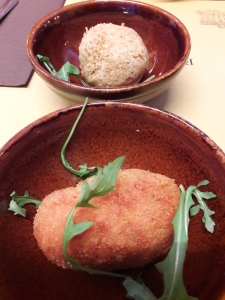 There were some very tempting starters, but we only had eyes for the fried rice balls! I got the suppli vegan, and Dr HH tried the vegan arancino.  I’m not sure what the difference is between suppli and arancino (the shape?), but they were similarly crispy and delicious, and both stuffed with rice.  Mine contained rice in tomato sauce and little cheesy pockets, while Dr HH’s was rice dotted with peas and mushrooms. We were both satisfied with these. 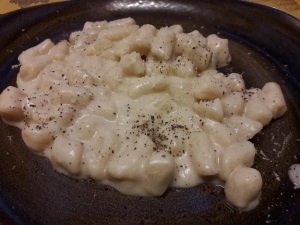 I have never seen a four cheese vegan gnocchi on a menu anywhere, so I was compelled to try this.  Actually, it didn’t quite live up to my expectations – I was expecting more depth of flavour from four different cheeses, but it tasted like my regular mac and cheese sauce which is only made with nooch. Maybe the four cheeses they used are too similar?  It was nice, but not the flavour explosion I was hoping for. 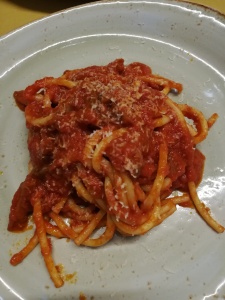 Dr HH definitely won with his main dish: bucatini with smoked seitan and tomato and chilli sauce.  I believe he only ordered this because one of his favourite quotes from Master of None is: “That ain’t spaghetti, that’s bucatini! It’s a thicker noodle, you dummy!” Whatever the reason, it was a great choice: those thicker noodles were perfectly cooked to retain a bit of bite (whereas my gnocchi were a bit too soft), the chilli provided a good kick, and the smoked seitan was delicious. 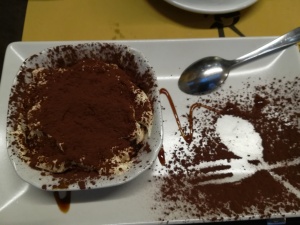 He managed to leave room for his favourite Italian dessert: tiramisu. It was extremely creamy, which he said was a big plus. He told me it wasn’t strongly coffee-flavoured, but I can confirm that this was a malicious lie to trick me into trying some (even a hint of coffee is too much for me). 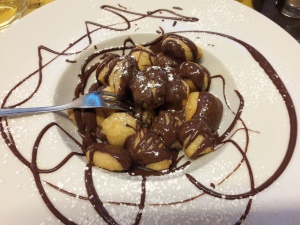 I ordered the dumplings with vegan nutella, which would have been ideal for sharing – it was far too much for one person!  I feel like this speaks for itself. Look at it. It was amazing!

With a wealth of veganisable Italian dishes, let’s never settle for a boring tomato sauce and fruit sorbet ever again!

What’s your favourite Italian dish? Could you have managed that entire portion of dessert dumplings?