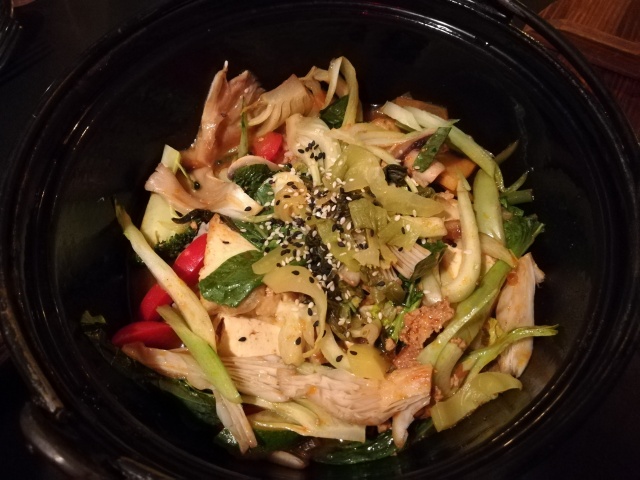 Vietnam has a special place in my heart, as I lived there for two and a half years when I first started teaching English. And so too does Vietnamese food. Although I was only vegetarian at the time, most of the food I ate in restaurants was vegan by default, as it’s more in keeping with the people’s Buddhist leanings: my local friends took me to Buddhist restaurants attached to temples, or invited me to their family meals when they had their plant-based days at certain points in the lunar calendar. I’ve really missed the food since moving away.

There is a huge Vietnamese community in Prague, but no vegan Vietnamese restaurants, which is a real shame.  As usual, Berlin leads the way!  A few years ago I ate at Quy Nguyen, and, when we visited Berlin in October 2017, I was determined to tick off another of the all-vegan Vietnamese establishments.

This time it was Cat Tuong’s turn.  We popped along at about 6pm on a Sunday, and to our surprise it was absolutely heaving!  Who goes out on a Sunday evening?!  We managed to squeeze in to the last table (it’s a small place, but they’ve got as many tables in as possible), and everyone arriving afterwards had to wait outside at the picnic tables until space became available. 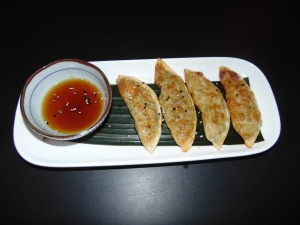 The menu was pretty tempting:  an array of starters, including summer rolls (but not fried spring rolls, more’s the pity) and these dim sum. The filling was fairly nondescript vegetable slivers, but the dumpling itself was good, and there was plenty of flavour in the dipping sauce. I’d never had dumplings quite as long and floppy as these, but they were still very good. 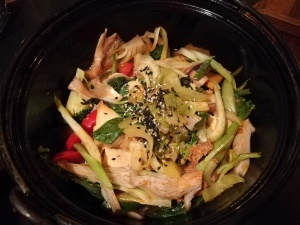 For my main, I went for the caramelised tofu dish, which came in a hot pot.  This dish had oyster mushrooms, seitan shreds, rice and veg, alongside caramelised tofu – I was hoping for sticky cubes of tofu, each side caramelised and delicious, but in fact it was thinly sliced so there wasn’t much edge on offer.  It was a little disappointing, but the dish as a whole had so many warming, delicious flavours that I can’t complain too much. The mushrooms were especially good.

Dr HH was less satisfied with his dish, which he chose from the specials board.  It was billed as green curry with soya balls, tofu, auberinge, coconut milk, veg, herbs, peanuts and onions.  There was one soya ball in the whole dish. One!  Obviously he was disappointed, though the curry itself was flavoursome.

We decided to give them a chance to redeem themselves with some dessert!  There were only two options, and we got the banana in sticky rice with coconut cream.  At first I was baffled as to where the rice was, but actually it was packed around the banana!  The coconutty custard was really good.  (The picture makes it look pink, but it was definitely all yellow.)  This dish got an enthusiastic thumbs up from both of us!

Overall this place was a bit of a mixed bag. I’d definitely go back and see if the other dishes ticked the boxes a bit more – there were some very exciting noodle-dishes being devoured! The flavours were so good that I suspect there’s a reason this place was so popular, even on a rainy Sunday evening.

Is going for Vietnamese food on a Sunday evening a trend I’ve missed out on? And does anyone prefer summer rolls to spring ones?