Cookbook of the Month: VeganMoFo18

As you may be aware, VeganMoFo can be somewhat exhausting – but I’m never too exhausted for my annual cookalong! I’ve taken a break from my usual cookbook of the month review to trial some of the recipes shared by my VeganMoFo comrades over the course of September. You probably won’t be shocked to hear that there were some real gems to be found! 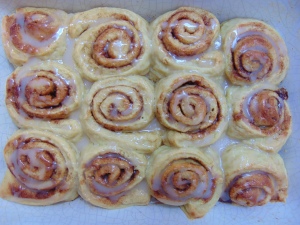 We’re suckers for cinnamon snails, so we couldn’t resist Ms. Pam’s Cinnamon Rolls, a recipe shared over at Mo Betta Vegan. This is a blog I just discovered through this year’s MoFo, and I’m glad I did – she’s posted some delicious looking recipes, and the posts about her nearest and dearest during Inspiration Week were really moving, as you’ll see from this post about her mother. As for the rolls, well, they were just delicious! Dr HH is the bread baker in our house, and he reported that the recipe was easy to follow. And as a skilled cinnamon roll devourer, I can report that they were delicious! Apparently the dough was a little thicker than Dr HH usually rolls it out (based on the dimensions in the recipe), so he was a little worried about the texture, but I thought this was the best thing about them – so pillowy and soft! 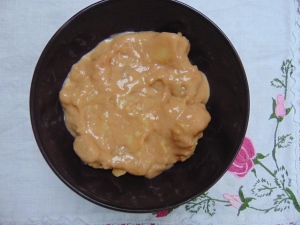 There’s nothing like a good soup for packed lunches, and I was extremely tempted by the baked potato soup over at Vegan in Your City. I had to improvise on the bacon grease, and I used more nooch instead of grated cheese, so it can’t have been as flavoursome as the original, but still, it was a tasty soup. Next time I’ll go all in with the cheese and some bacon crumbles too. 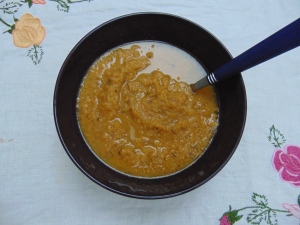 Sticking with soup, here’s the autumn sunshine soup from Vegan Ha Ha. It was basically a roasted butternut squash and lentil soup, featuring rosemary, thyme, and sage – usually when I make a squash soup, I go for spicier seasonings, so this was a bit of a change. And it’s a change I’ll stick with! The herbs gave it such a lovely, comforting aroma and taste. When I opened my Thermos at lunchtime, it really was like a blast of autumn sunshine! 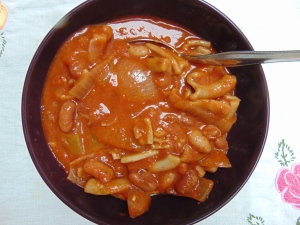 I’m always happy to see Emma from Walks, Talks & Eats posting VeganMoFo recipes because I know I can rely on the ingredients being relatively easy to get hold of and the flavours being delicious. As usual, she did not disappoint this year! This spicy pasta soup sounded suitably hearty for two hungry people like Dr HH and me. It’s rare to find a spicy dish that Dr HH and I agree is perfectly seasoned (they’re usually too spicy for me and too bland for him), but we both enjoyed this one.

The storecupboard meal prompt was one I was looking forward to, as I find shopping and meal planning a bit draining sometimes. Over at The Opposite of Indifference I read about this tomato and lentil soup and knew I had to try it. Simple, filling tomato soups are a lifesaver in our house! This one was indeed simple and delicious. I jazzed it up by chucking in half a jar of pesto leftover in the fridge, but it would have been flavoursome without that too. 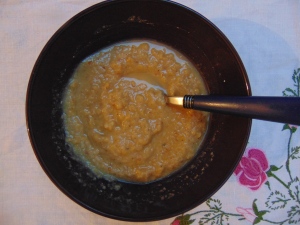 I’m a huge fan of AfroVeganChick, and I was very excited about her MoFo theme of veganised African dishes. She has posted a lot of amazing things, including this Sudanese lentil soup. I really loved the simplicity of it: lentils, water, garlic, and spices. It was really warming, and ideal for the changing seasons.

AfroVeganChick‘s day 1 post was also particularly tempting: groundnut stew with chickpea cutlets. We are perhaps the only vegans who have never made chickpea cutlets before, and I can now confirm that there’s a reason everyone is doing it. They were good! A couple of them crumbled a bit during cooking, but they were very tasty. And the sauce was spectacular, quite similar to mafe. We had leftover sauce with tempeh after we ran out of cutlets, and that was also a treat.

And I’m not the kind of person who can just say no to a fish balls recipe! Yes, it’s AfroVeganChick again – I have bookmarked almost all of her recipes to return to. We tweaked these slightly, because we weren’t sure where the fishy flavour would come from – Dr HH threw a sheet of nori and some dill into the mix, and everything worked splendidly. The mix was quite sticky and needed some flour adding to make it workable, but we were very happy with the end result. 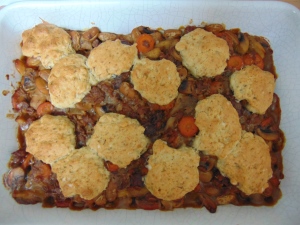 Amber from This Vegan Lyfe shared a lot of tempting recipes this month, including her No Fail Pot Pie on the food flops day. Her flop was dropping this entire pie on the floor…I couldn’t get any kale or spinach, so I threw in some mushrooms instead…and added some tempeh just for fun as well! It was just as you’d expect: really flavoursome and delicious. I can only imagine the devastation of dropping this concoction on the floor!

Over at Vegan or Not, I was extremely taken by this Ohio-style shredded chicken sandwich. I’d never seen this kind of sloppy chicken sandwich before, in the UK I feel like it would always be quite dry. We recently discovered jackfruit in Prague and had been looking for an opportunity to use it: now here it was! Dr HH thought the flavour was a littl mild, but I loved it, and we were both crazy about the texture. A definite winner, and not as messy to eat as I’d feared! 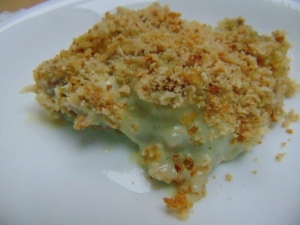 And here’s another recipe from Walks, Talks & Eats! I have a lot of Emma’s recipes bookmarked, but this creamy vegan mac and cheese was the first one I tried. It was for the nut-free prompt, so the creamy sauce was made with silken tofu. We both loved this – it was easy to make (with the added bonus of not needing to remember to soak the cashews in the morning!), and very tasty. We’ll make it again, and throw in some tempeh bacon crumbles for good measure! 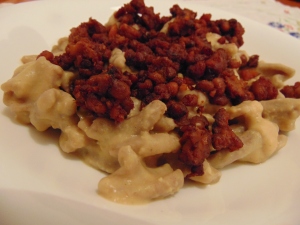 Here’s another recipe from Vegan HaHa…and another mac and cheese! The nut free creamy sauce worked an absolute treat, largely because it was very similar to the Isa recipe we love, but using beans instead of cashews for the creaminess. You can’t beat miso in a cheese sauce, that’s what I’ve found! And you can see that this time we had our bacon crumbles on hand.

Budget week was quite an exciting one, and I especially enjoyed this $4 for 4 people burrito bowl from Adventures in Veganism. We usually avoid bowls because the multiple components are not really ideal after work – but this one was quite straightforward and the washing up did not spiral out of control. Everything was really flavoursome from all the seasonings, and we found it a very tasty and filling dinner. 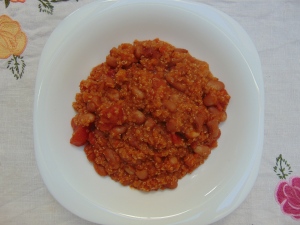 The World According to Plumes was one of the new blogs I discovered this VeganMoFo, and I’m already a huge fan! I threw together this coconut black bean stew yesterday, and haven’t actually had a portion yet, but I can tell you from my taste-testing that it will be good! I love the flavour hit from the coconut milk. Black beans are difficult to find in Prague, and even kidney beans are impossible to find in the zero waste shop, so I settled for pinto beans.

The chocolate hazlenut oat bites from Food for Dissertating were really simple to eat, and really delicious – not surprising, given that chocolate-hazelnut spread is the main agreement! I’ll definitely be making these again for a quick and easy bite.

Over on Instagram, I was powerless to resist this banana bread posted by @nomeatandthreeveg. I didn’t add the banana on top, and threw some chocolate chips into the batter, and I was delighted with this. Really easy, really tasty! 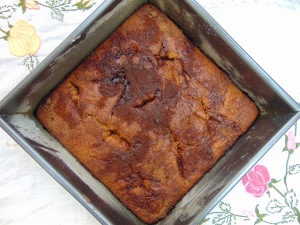 One Raw Bite is one of my favourite blogs, and I was happy to see Jennifer following another cake theme. There were a few things that tempted me, but I went for this cinnamon flop, mostly because I loved the name so much! I followed the recipe precisely, except that I used coconut sugar instead of granulated, hence my cake looks a bit different from the original. It’s really delicious though, and made the kitchen smell quite festive!

What a year for great VeganMoFo recipes! Thanks to all my fellow MoFo participants for all the inspiration!

This entry was posted in Vegan Mofo and tagged veganmofo18. Bookmark the permalink.

9 Responses to Cookbook of the Month: VeganMoFo18