For the third year in a row, I was desperate to try the Tyne Chease selection box at Christmas – and for the first time ever,  I was successful! Both previous years I was unsuccessful because they had already sold out, so this time I was ready: I asked my mum to order it and pop it in the freezer before I’d even booked my flight home for Christmas. (Last year she’d managed to get me some cream cheeses, which were very nice indeed, but there’s no substitute for a proper cheese board.)

These ten cheeses are very small, and I hope it’s not absolute gluttony to have devoured the lot in one sitting. Dr HH and I shared these for cheese supper on Christmas Day, and it was perhaps the fanciest I have ever felt (and we were in our pyjamas and watching a superhero film, so that’s saying something).

For each flavour, we simply chopped the cheese in half and slathered it thickly on a cracker. There were ten flavours: Za’atar spice, pink peppercorn, dill, garlic, smoked, Ethiopian spice, chilli flakes, original, mustard, and sundried tomato. 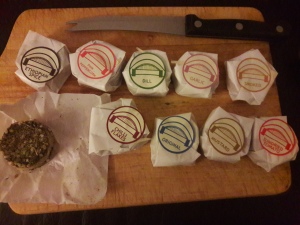 I skipped the dill and mustard ones, because I don’t care for those flavours. Everything else was simply delicious! My favourites were the ones that were coated in a flavoured crust, like the za’atar one unwrapped above. It was so flavoursome! The peppercorn one also stood out, along with the smoked, though the chilli flakes were a bit spicy for me. The cheese was pleasantly creamy and spreadable, and I heartily enjoyed them.

My mum had been quite disappointed by the size when she received them, but I think it was perfectly sized if you’re planning on sharing with just a few people. And I would happily order this pack again, even with the dill and mustard cheeses in there.

What a time to be vegan – five years ago I never would have guessed I’d be tucking into a delicious cheese selection box!