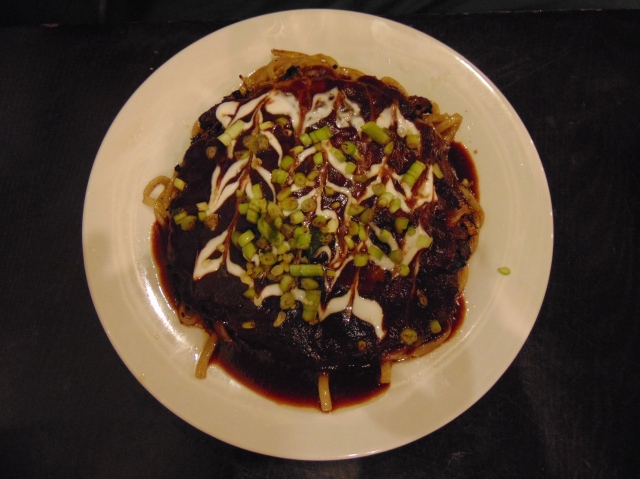 Wherever you go in the world, you can always without fail find an Irish pub. Osaka was the first place where we found a Canadian one though! It was quite an unexpected discovery, and I don’t really know what makes a Canadian bar different to any other (besides the massive Canadian flag on the wall, obviously), but this place had a very exciting vegan menu, so I didn’t ask too many questions! 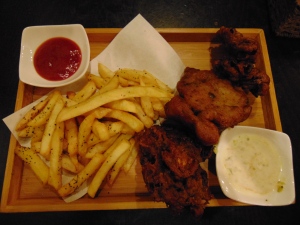 The vegan menu featured exciting dishes like poutine, mac and cheese, lasagne, pizza by the slice, and brownies, plus various bar food options like onion rings. I ordered the fish and chips, because that’s a hard thing for a Brit to turn down! The chips were really well-seasoned, and the fish was battered mushrooms (similar to what we had at Paprika), which were very tasty, though there was no apparent effort to give them a fishy taste (nori, dill, etc). Calling it fish was a bit of a stretch – it was very much chips with battered mushrooms, but that was fine by me! 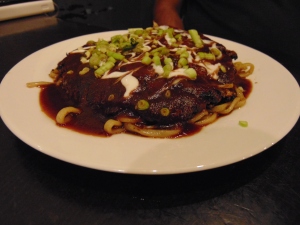 Dr HH went Japanese and ordered the okonomiyaki, a local speciality which we were yet to see veganised before coming here. Essentially it was a bed of noodles topping with a thin pancake featuring spring onions, cabbage and carrot, and the whole thing was absolutely swimming in teriyaki sauce. There was far too much sauce, so he wasn’t overly impressed by this, but was pleased to get to try the dish anyway. 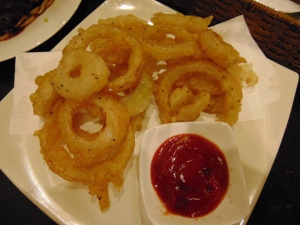 And we was also pleased with these onion rings that we ordered to share! I felt I already had quite enough oil on my place, so after testing them out I let him devour the rest. 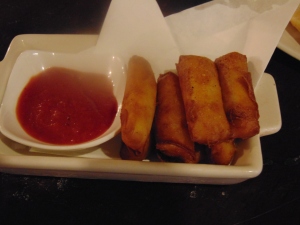 We returned again another evening because we wanted something quick and easy. This time we shared the daily special, which was cheese and jalapeno sticks. They were more spring roll-like than I was expecting, but they were still tasty. 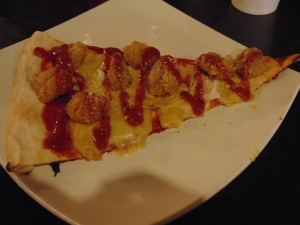 And we each got a slice of BBQ chicken pizza, which was delicious! There was lots of cheese (though it seemed more of a creamy cheese sauce than regular melted cheese), plenty of BBQ sauce for flavour, and a generous helping of tasty little chicken bites. This was absolutely wonderful! From the menu we got the impression that the vegan pizzas weren’t available as a whole, you could only order by the slice, which was a shame – a whole one of these would have been sensational!

This place served its purpose well and gave us the solid comfort food we were craving. The menu also had some fun mocktails too, and service was really friendly in the familiar, western way. My only complaint was that smoking was allowed inside. This was a really difficult concept for me to grasp, having lived with smoking bans for a long time. I don’t really want my food to taste of other people’s cigarette smoke, and I feel bad for the people who work there and have to breathe in the smoke all day. Here’s to more smoking bans!

Have you ever been to a Canadian bar?