After being stuck in a food rut for a good few months, I have finally broken free! I was hoping to return from my trip to Japan feeling reinvigorated and with a renewed enthusiasm for both discovering new vegan places and writing about that, and I’m pleased to say that that was indeed the case. Prior to that, I was so demotivated that I hadn’t even bothered to visit a new, all-vegan place just 15 minutes from my office. Finally, I have righted this great wrong.

Eaternia is a very casual, cafeteria style place. It has a jukebox and a rocky kind of vibe. It’s very, very vegan. Like most Czech places, there’s a daily lunch menu, which always features some kind of dumplings on a Friday, and an evening menu as well which has a burger and hot dog alongside two dishes that are novelties on vegan menus in Prague: langos (actually, I’ve seen that once as a daily special and once at a festival), and poutine. 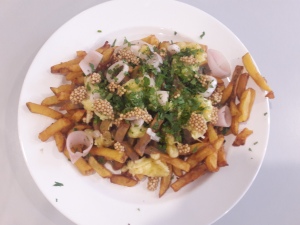 Dr HH ordered the poutine. It was a bit light on the gravy, which was all at the bottom of the portion and didn’t taste very strongly of mushrooms, but he enjoyed the chips and melted cheese a lot. As someone who doesn’t like my food very saucy, I’d say this would have been the perfect poutine for me.

The langos, on the other hand, was a bit too saucy! The fried dough itself was spectacular, but I wasn’t expecting quite so much ketchup. It was nice, but a bit much.

Based on price, we’d assumed the langos would not be enough to fill me up, so I got some chips on the side. They were really good chips, but they were all weirdly short! I wonder if they’d somehow been stuck with the smallest potatoes in the world?!

The dessert counter looked spectacular, so we had no choice but to partake. Dr HH went for the lotusmisu, which looked creamy and delicious. He felt that there wasn’t quite enough sponge in there, and the flavour was a bit confusing – it didn’t taste of Lotus biscuits, it had a hint of coffee, and he suspected there was booze in there. He said it was nice, but a bit weird! 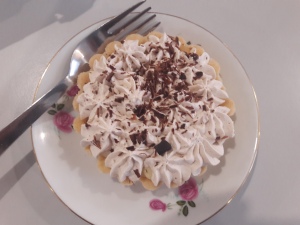 Meanwhile, I had this custard tart. It was spectacular! The crust was almost biscuity, the custard was absolutely beautiful, and the cream topping was surprisingly light. I would have one of these every day if I could…but there were so many other good options too!

We also got a couple of cinnamon rolls to take away for breakfast the next day: they were big, beautiful, and had a really wonderful texture. They kept really well overnight too, which isn’t always the case.

This was such a wonderful little place, and I really wish I’d pulled myself together and visited it sooner! Think of all the custard tarts I could have been eating…

Are you on board with ‘dumpling Fridays’?

6 Responses to Vegan in Prague: Eaternia