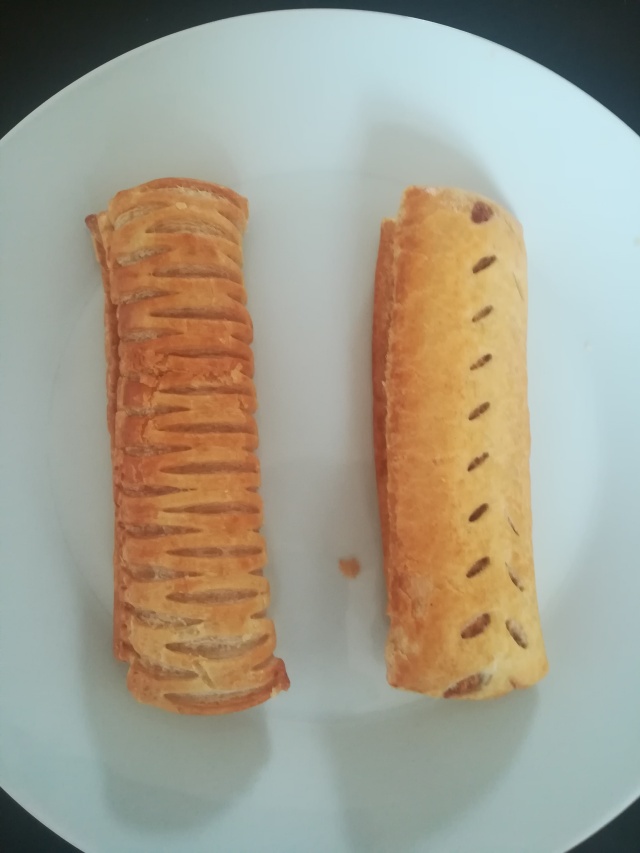 Back in January, the UK’s dominant high street bakery, Greggs, created national headlines (and attracted the ire of Piers Morgan) when they launched a vegan sausage roll. I was displeased that they introduced it the day after I flew back to Prague after the holidays – it seemed a little personal – and I had to settle for watching from afar as my local vegan Facebook group in the UK blew up with notifications about which branches of Greggs were selling them, which had sold out, and how delicious they were. All the while, a few people were quietly pointing out that rival high street bakery Pound Bakery had been selling vegan sausage rolls for quite some time, to much less acclaim/irritation.

I immediately announced to Dr HH my dream scenario: a blind taste test of the two vegan sausage rolls so we could say with confidence which was best. We spent months discussing it, and finally this summer it happened! Dr HH trotted over to the local mall and picked up two of each, then plated them up in the kitchen, and presented them to me like so.

Anyone who is familiar with these two establishments could probably guess which was which, so I probably should have been actually blindfolded for it to be a true test. The Greggs sausage roll, which costs £1 a pop, is the one on the left with the neater pastry styling. The Pound Bakery version, sold at two for £1, is the looser, paler, less ornate roll on the right.

They were both really good sausage rolls with a lovely meaty filling, but the Greggs one was the clear winner. The pastry was flakier, and it was a bit more generously stuffed. The Pound Bakery one was nice, but a little greasier. Dr HH declared me a snob for preferring Greggs, but had to concede that he agreed with my assessment.

And let’s face it, there are no losers in this game. I’d happily eat either of them by the bucket load, and I’m really excited to see vegan options going truly mainstream. The real question is why sausage rolls have never made it big internationally. I’ve never seen one in another country. Are we keeping it secret as some kind of post-Brexit negotiating tool? Is the rest of the world rejecting it for some insane reason? Why has the world embraced the hot dog over this majestic and far superior creation?!