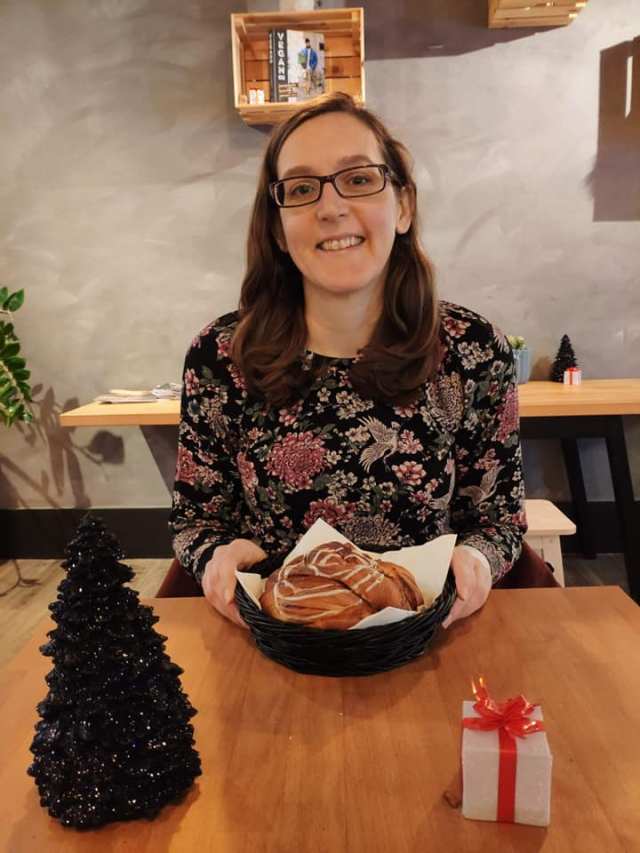 There was not a wealth of vegan options in Tromsø during our Christmas stay – in fact, Frø was the only all-vegan place that popped up on Happy Cow. It’s a cosy little cafe on the high street serving a variety of hot and cold beverages, a few light savoury options, and, most importantly, some baked goods.

My main goals on our trip to Tromsø were: to see the Northern Lights, to catch a glimpse of whales, and to eat a really good cinnamon bun.

We did manage to see the lights…

…and a feeding frenzy of humpback whales and orcas…

…and Frø helped me tick that last box! They had a fresh batch of cinnamon rolls every day (and yes, we were there every day). Also, the people who worked there were the sort who will deliberately fish out the biggest available buns without you having to ask – my kind of people! As such, the buns were massive.

They were very well baked: soft and pillowy inside, with a pleasant hint of crunch on the crust. They were sublimely cinnamony, and even better when they had iced ones on Christmas Eve. We got a few to take away to tide us over for Christmas morning and Boxing Day, and they kept well too – in fact, they were better when we warmed them up the next morning than when served cold in the cafe.

The hot drinks were a hit too – I was desperate for a good hot chocolate to match my wintry surroundings. (Don’t get me wrong, I’d taken some hot chocolate flakes with me and been making my own almost constantly, but it’s nice to get them served up instead.)

Apparently they serve a pancake brunch every Saturday, but we missed out on that, more’s the pity. At least we got plenty of great Norwegian buns though!

5 Responses to Vegan in Tromsø: Frø