If you read my 2019 Hits and Misses post, you’ll already know that I wasn’t blown away by the pizza here. Dr HH and I spent Christmas week in Tromsø, right up in the north of Norway, in a bid to have the most wintry white Christmas possible. As you have seen, that bid was quite successful…

We weren’t really there for the food, for a change, which is just as well! Vegan options were few and far between, and this was made worse by festive opening hours. We came to rely on Peppe’s Pizza to keep us fed – and so did many of the other tourists in town, by the look of it. I don’t think there were any locals in there at all.

The menu was quite kind to vegans – there was a vegan burger, a vegan dessert, and several vegan pizzas. As well as a vegetable pizza, there were a few with Oumph! chunks on top. It seemed like a decent showing. But alas, all the vegan pizzas replaced cheese with vegan aioli, which is not a fair substitution in my book. 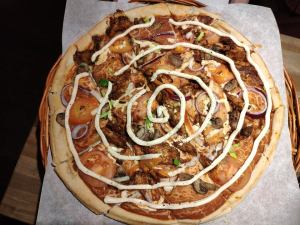 We ordered a large Chicago Oumph! Vegan Pizza, which was the perfect size for sharing. It was my first time trying Oumph! and I was very impressed, in terms of both texture and taste. I was less impressed by all the raw tomato slices on top, and by the aioli spiral, which was really unappetising. On our subsequent visits, we ordered it without they aioli and found it much better, although we did then notice that the sauce had a really strong fennel/aniseed flavour which was quite surprising and not wholly welcome. (Is that what we should have expected from a “Chicago” pizza though?!)

Also, the pizza was sliced in a fascinating fashion, not in the standard six or 8 slices, but in small chunks. I’d never seen pizza slashed up like this before and I’m not in favour of it. Some pieces had no crust, some were teeny tiny, it was all very strange. 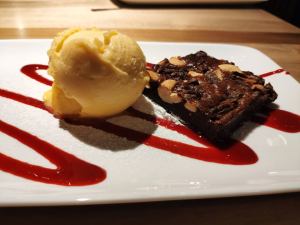 On our final visit we treated ourselves to the vegan dessert as well: a chocolate brownie with mango sorbet and raspberry sauce. I didn’t have much of an appetite for sorbet given the icy surroundings, but it was actually a really good creamy sorbet and not to be sniffed at. The brownie wasn’t a classic bake, and was disappointingly flat, but it was a bit gooey and very chocolatey, so it definitely ticked some of the boxes. I don’t think I’ve ever seen cashews in a brownie before, so that was also something new! All in all, not a mind blowing dessert, but a pretty good one, and I was grateful for the option.

“Grateful for the option” just about sums up my overall attitude to Peppe’s. It served us well in our time of need, and they were clearly trying. But if you wouldn’t replace cheese with mayo for meat eaters, don’t do it for vegans either. We deserve better! Still, it wasn’t as bad as that time my “tofu cheese” was just a block of unseasoned tofu crumbled onto my pizza…

What’s the worst cheese alternative you’ve been served on a pizza?