Usually when I’m going on holiday the first thing I research is where to get my sweet fix. If there’s a vegan doughnut in my destination city, I’ll find it! As such, vegan cafe Cloud Cakes was a top priority for my trip to Paris, and we made a beeline for it as soon as we landed. However, we found it completely packed so we had to look around for a backup breakfast option instead. Fortunately, we’d just wandered past this vegan establishment on the same road and decided to give it a whirl.

There was only one other person there when we arrived shortly after opening, and the whole place was freezing, neither of which was a particularly promising sign. It got much busier (presumably some other over spill from Cloud Cakes as well), but not any warmer, so bear that in mind if you’re visiting during winter. 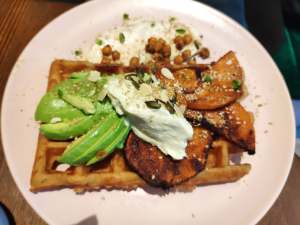 Wholywood is billed as a whole foods, vegan street food kind of place. I’m not too sure about the “street food” part – the menu was largely burgers and hot dogs, which prompted some discussion amongst ourselves about whether they are generally classified as street food (what’s your verdict?). They were all Beyond Meat based, so we decided to skip them as we don’t want to pay €10 for a burger we could buy ourselves. They also had a few bowls (again, is that street food?), and a savoury waffle, which is what we both went for.

It was a really good waffle! I always prefer sweet to savoury, but this was really well done. The waffle itself was light and fluffy, and the toppings brought plenty of flavour: avocado, sour cream, tahini, chickpeas, maple-roasted sweet potato slices…it was all good. It was a hearty and delicious breakfast.

There were also a few baked goods to be had, up by the counter. There were croissants, which are generally hard to pass up, but the cookie selection was truly a game changer! There were several different varieties, but we both ordered the standard chocolate ones to take away for first breakfast the next day. They kept well overnight, though they were a bit softer than expected. However, I love a soft cookie and they were truly delicious! They were very thick (which might explain the softness), and had a pleasant variety of chocolate chunks and smooth chocolate spread, which really added to the excitement.

I wish I could have brought a bag full of these home with me – at least I’d have been able to enjoy them in the warm!

What’s your take – which of these dishes count as street food?

4 Responses to Vegan in Paris: Wholywood