Vegan in Brighton: Terre a Terre 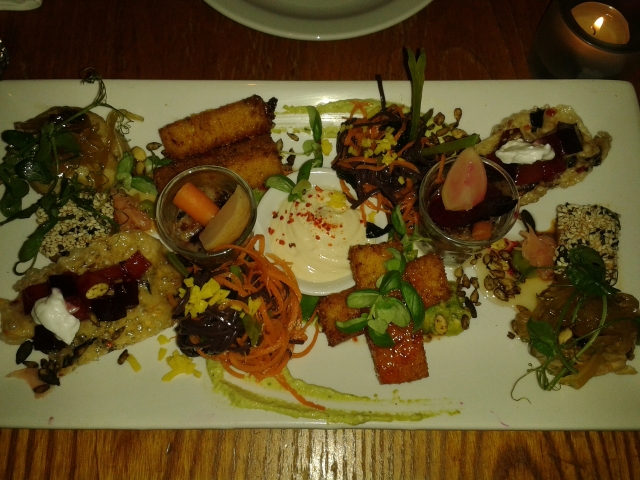 No trip to Brighton is complete without a visit to Terre a Terre.  In March when I stopped by for Vegfest, I squeezed not one but two feasts in during my 48 hours by the sea.  Alongside the afternoon tea, we also had a fancy evening meal there.

We started with Terre a Tapas, a sharing plate consisting of a little bit of everything from around the menu, handily featuring two of everything to avoid any fights.  In the front right hand corner above is some potato dauphinoise, which was tasty.  Next to that is a cube of sesame hoisin tofu, which was one of the highlights, and in the back a tapioca cracker with pickled veg, which also featured in the afternoon tea.  In the shot glass were some tasty root vegetables, fancily cooked and arranged.  The highlight is just the other side of the shot glass, a heaped salad of carrot and seaweed.  I hadn’t expected it to be one of my favourites, but it really was a treat.  And in the centre of the plate is a little dish of fondue, served with the chunky chips of spicy arepas.  I love plates like this, where you can peck at lots of different things.  It’s rare to have the opportunity to eat in this way, so I have to grab it when I can! 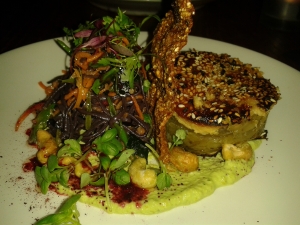 My main course was the aubergine dengaku.  I chose this one because I am falling madly in love with Japanese cuisine and I couldn’t resist.  Happily, it also featured the salad I loved so much from the tapas plate.  Victory!  I actually enjoyed it more than the aubergine concoction which was intended as the main attraction.  The top was lovely and crunchy, the aubergine was soft and meaty from slow-cooking, and there was my favourite flavour combination hiding in there:  tahini and miso.  However, it was sitting on a splodge of wasabi pesto.  It’s not the heat that puts me off wasabi, it’s just the taste.  I don’t like it at all.  It infected the aubergine a bit more than I would have liked.

In the middle of the plate is a seaweed cracker that brought some fantastic texture to the dish:  it was really salty and savoury, and I just loved it.  And look how vibrant and pretty it all is.  Quite the dish! 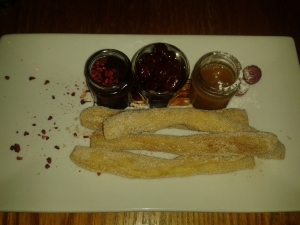 I still had room for dessert, even after all this feasting.  There was no doubt in my mind that I’d have anything besides the churros.  Let’s face it, deep-fried dough is a thing of beauty, and especially when you only rarely see vegan versions.  These churros are accompanied by vodka cherries, which are very boozy; dark chocolate, which is rich and sumptuous; and caramel, which is sticky and sweet.  That was my favourite.  It’s the kind of dessert I simultaneously want to wolf down and luxuriate in:  it’s so good you need more, but you can’t bear for it to end.

All in all, I think it’s probably just as well I don’t live near Terre a Terre, as it would be too great a temptation, to the detriment of my waistline and my bank balance!  But for a treat, it’s absolutely wonderful.  It’s the best restaurant of its kind, showing that meat-free meals can be whatever you want them to be:  sumptuous, exotic, creative, delicious.

This entry was posted in Travel and tagged Terre a Terre, vegan Brighton, vegan travels. Bookmark the permalink.

9 Responses to Vegan in Brighton: Terre a Terre