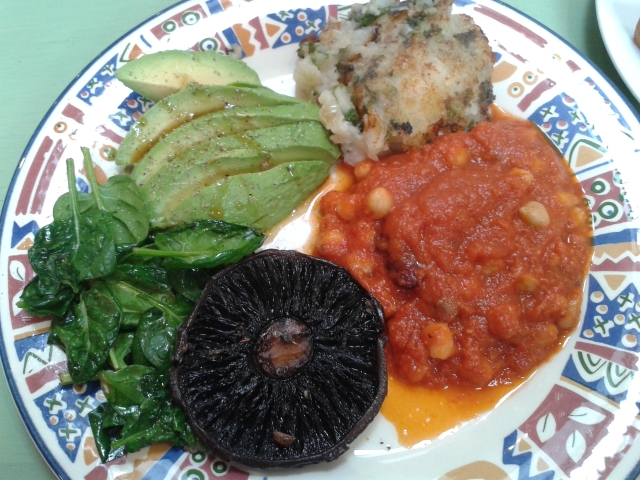 Here’s a prompt that fits in beautifully with my theme for MoFo:  what is more traditional than a Full English?!

This is a tolerably healthy take on the full breakfast from Healthy Spirit, a nice little cafe at the back of a health shop in Didsbury.  It was just a ten minute walk from my old flat, and I miss it dearly!  Breakfast comprised of homemade beans, a big juicy mushroom, wilted spinach, tasty avocado and a bubble and squeak patty.  I loved that it was a twist on the usual breakfast, though initially I was worried that it wouldn’t be enough to fill me up.  The beans were really tasty, and you can’t go wrong with the beautiful simplicity of avocado or mushrooms.  I’d expected the bubble and squeak to be the highlight, but found the patty a wee bit cold – if it had been piping hot, it would probably have been my favourite element. 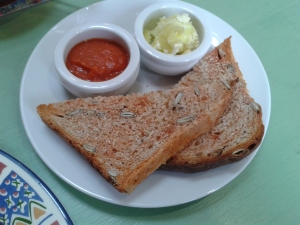 The breakfast was £6.95, including toast and a brew.  The toast was delicious sourdough bread from local Uprising Bakery, and it was very good.  The ketchup was tasty when I dipped my knife in, but I’m not really sure how it was intended to be eaten – the thought of ketchup in the same vicinity as toast is enough to turn my stomach, and even my fellow, who will mix all kinds of food, merely had the ketchup separately.  Much better was the other pot: tell them you’re vegan and they give you a mixture of coconut and olive oil, which was spreadable and tasty. 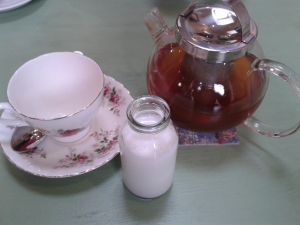 And the chai tea I went for – the cafe’s own brew, available to buy right there – was really nice too, and accompanied by a little bottle of coconut milk which went down a treat.

Value for money:  it doesn’t look like a lot of food for the price.  I know avocados aren’t cheap, and I didn’t really mind paying for good fresh food, but still, for £6.95 there wasn’t much.  3/5

Speed of service:  I find it exceptionally difficult to leave the house without having eaten, so if I go out for breakfast I need my food to be served rapidly.  We went on a week day, right at the 10am opening time, and as the only customers we were scoffing within 15 minutes.  Very pleasing!  4/5

Quality of cooking:  the bubble and squeak patty was a little cold, but everything else was spot on, and it was all home made food.  3.5/5

Creativity:  it felt really fresh and a nice twist on the usual, somewhat greasy cooked breakfast.  For being unique and a touch lighter, and for the sensational bread, it’s earned a high mark.  Just a smidgen more food would have been nice!  4.5/5