So, British cuisine probably isn’t my favourite, but it’s got a pretty good breakfast in its favour (and it’s not nearly as bad as foreigners seem to think!).  Also, see how beautifully it ties into my MoFo theme?  Let’s look at another full English.

The big breakfast at Teatime Collective is everything you would expect:  hearty, a bit greasy, and very satisfying.  Teatime Collective itself is a wonderful little place.  I first went when it was fairly new and only had a bare minimum of indoor seating:  a wee table for two, and a counter with three stools.  Everyone else was left to dine at the picnic tables outside, which is remarkably pleasant on a bright, sunny day – but in Manchester such days are few and far between.  Happily, sometime last year they picked up a freight container than has been cosily converted into a little seating area and even on a cold February morning it was warm and pleasant in there.

Situated in Hulme, Teatime Collective isn’t the kind of place I’ve ever been easily able to just pop into – it’s a bit out of the way.  And as it’s closed in evenings and on Sundays, I was always very limited as to when I could actually go.  On the rare occasions I did make the trip, though, it was certainly worth it, and it’s nice peace of mind to go somewhere that is 100% vegan (and staffed by some of the friendliest people imaginable).  It opens at 11am but only serves breakfast for one hour, so we were anxiously checking our watches as we made our way there.  Fortunately we made it with half an hour to spare and ordered our big breakfasts (there are a few other options, but my dining out breakfast policy is very much ‘go big or go home’, so we didn’t waste time pondering) and I got a hot chocolate, which always comes topped with cream.  Delicious!

Alas, even trying to eke it out, I could not make the hot chocolate last the thirty minutes it took for breakfast to arrive.  I don’t like giving waiters/chefs a hard time, least of all in a vegan place, but we were the first customers of the day, so it was a bit irksome.  When the breakfast plate finally arrived, though, our grumbles quickly disappeared. 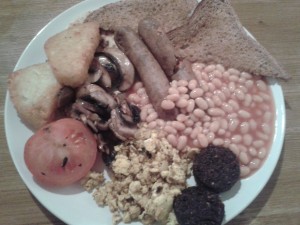 Look at that plate!  (Although actually, one final grumble:  there should never be a situation in which beans touch anything vegetably or scrambled.  I had to do some pretty rapid scraping.)  The grilled tomato is surplus to requirements, in my opinion:  a bit of spinach on there might have been nice, but all my tomato needs are covered by the beans.  But the mushrooms were tasty good, and always have a place on a breakfast plate for me.  The sausages were nice but nothing special, and the beans a bit too numerous for my tastes (I like dry food too much to be impressed by beans), but I know that’s just personal preference.  The black pudding and the hash browns looked to have been deep fried, they were so crispy – definite plus points.  Hiding under the hash browns was a tasty little potato cake, something I’d never tried before but would definitely have again.  As a lot of this was likely ready-made rather than homemade (hash browns, sausages, beans, black pudding, bread), the tofu scramble added a nice unique touch.  It had a surprising spiciness and was closer to scrambled egg in appearance and texture than any I’ve had.  I’m somewhat spoiled by the fact that my fellow makes the best tofu scramble ever (though as he dutifully says, he learned from the best), but I still enjoyed this a lot.

In conclusion, this is exactly what I expect from a big breakfast and I left with a heavy belly feeling very satisfied, and a bit disappointed I’d eaten too much to have room for some of the chocolate tiffin on the counter.  Personally I prefer a little more creativity and flair, but Teatime Collective tends to save that for their burgers and cakes and just let a straightforward breakfast speak for itself.

Speed of service:  pretty poor.  I know the staff are busy, but a thirty minute wait is pretty long and it messes up the whole timing of the hot drink+food combo.  2/5

Quality of cooking:  everything was toasty hot, no burnt toast, nice crispy hash browns and black pudding:  no complaints.  5/5

Creativity:  hearty, but unimaginative, and not that different to what we cook up ourselves when we’re having a full breakfast in bed.  2.5/5