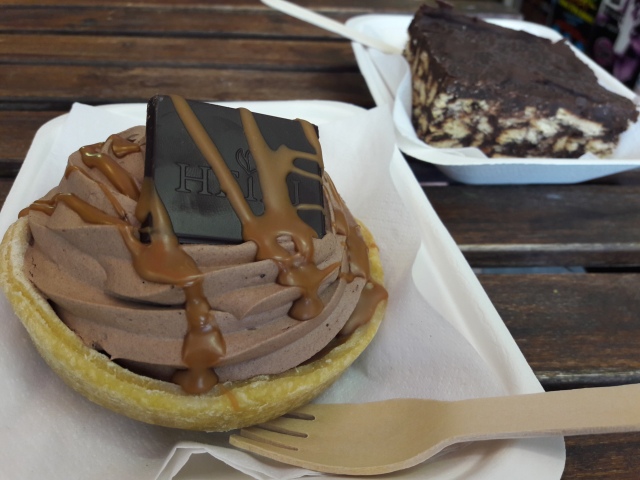 Dr HH frequently tells me that he doesn’t understand the North vs South divide in England – spoken like someone from the Midlands, if you ask me! The rest of us know that it’s serious business. In my entirely unbiased view, the North is far superior in almost every way – especially concerning accents – but even I have to concede that the South (London, if you will) has the upper hand when it comes to all-vegan eateries.

But I think northern cities are slowly catching up, and they certainly have the quality, if not the quantity just yet. While I was home in July, I visited one vegan bakery in London and another in Manchester, so let’s see how they match up.

Cookies and Scream is an all vegan bakery/cafe in London that I have long wanted to visit, largely based on their tempting Instagram feed. We happily took a detour out to Holloway Road when we were last in London to this quite small, but extremely well-stocked little place. It had a fun, retro feel to it, and seating both in and outside. They serve hot beverages, milkshakes (made with ice cream), brownies, cakes, cookies, and various other treats. Everything’s vegan, and it’s the kind of place where a glutton like me could spend hours deliberating over what to order. 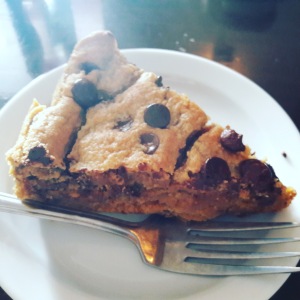 Fortunately, I arrived hungry enough that I had to make my mind up pretty quickly or I would have perished. I was powerless to resist this chico pie, which was a delightful peanut butter and chocolate chip concoction. On the server’s recommendation, I got it warmed up (even though it was a scorcher outside), which resulted in a beautifully soft and almost gooey texture. It was like eating cookie dough, which is to say it was absolutely majestic! 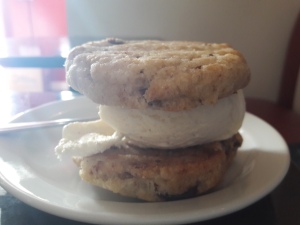 Considering the temperature, Dr HH tried to cool things down with this choc chip cookie ice cream sandwich. As he can’t unhinge his jaw, it’s just as well this beast came with a fork – you can’t really eat this as a sandwich. He thought it good, but not mind-blowingly so. The cookies were tasty, and you can never go wrong with Swedish Glace. I think if he’d made a more exciting choice, he might have liked this place as much as I did.

Travelling north to Manchester, we turned our attention to Teatime Collective. This used to be a cafe somewhat out of the city centre, serving excellent breakfasts, burgers, cakes, and Christmas feasts. This year they’ve transformed into a rather breathtaking cake counter inside a clothes shop in the Northern Quarter, a much more central location. (Unfortunately, they announced this weekend that they’ll be closing the cake counter at the end of the month and closing down permanently after that. It’s such disappointing news, and a reminder to always support your local vegan businesses when you can.) The cakes in the cafe were always exceptional, so it was very exciting to see them developing a much bigger range of sweet treats. Again, it’s really difficult to narrow it down to just the one cake though! 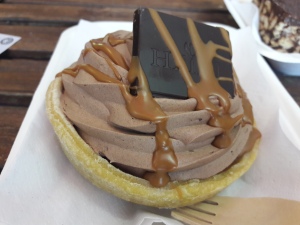 As such, Dr HH and I decided to share a couple of desserts. We started with this salted caramel and chocolate tart which, I’m pleased to report, was basically 90% cream! The caramel flavour was nice and not too overpowering (as caramel can sometimes be, I find), and though the base was a little softer than I might have liked, it was still really good. 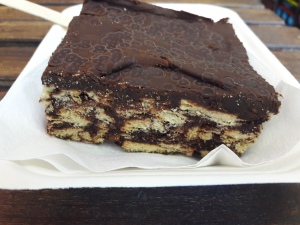 We were too full after that to manage our second treat, this gigantic slab of tiffin. When we were eventually able to eat again, we were both very satisfied indeed with this. I suppose it’s hard to go wrong with tiffin, but this still deserves credit for being so good. 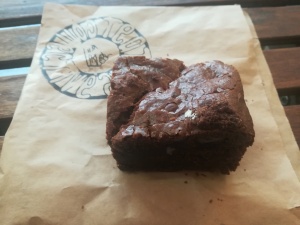 Apparently people from the Midlands think it’s fine to abandon their loved one and go for vegan treats without them, so Dr HH actually went to Teatime Collective on a separate occasion without me. (Maybe people from the Midlands are the real villains, and Northerners and Southerners should unite against them?!) He treated himself to this brownie with maple and pecans, which he declared big and hearty, but more cakey than brownie, which is always a shame. Still, delicious!

On balance, and probably to the surprise of nobody who read the first paragraph, I think the North just edges it in this match up. But let’s face it, when it comes to vegan bakeries, everyone’s a winner.