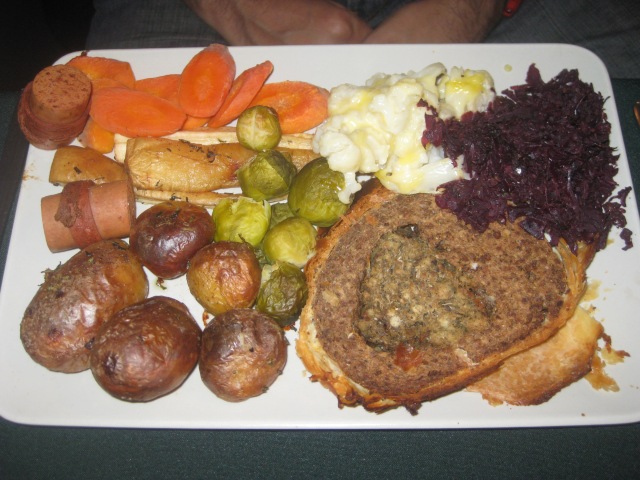 Merry Christmas, friends!  I hope the festive period is treating you well, and that you are full of food and mirth.

Last year we went for Christmas Dinner at Teatime Collective, Manchester’s best all-vegan establishment.  And it was so good that we went back for more this year.  A lot more, in fact. 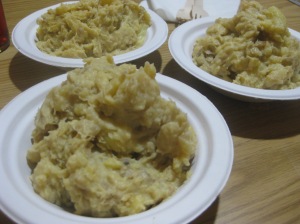 First of all, we caught them in Manchester city centre at the VON (Vegan Organic Network) Christmas fair where they had the monopoly on hot food.  I was with two dairy eaters, and all three of us ordered the cheesy potatoes – and all three of us loved them! 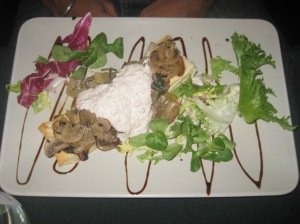 Then we visited the cafe itself in Hulme for a proper Christmas dinner.  I’d been patiently waiting for an announcement on social media about evening opening times for Christmas dinner (they’re usually closed in the evening, and it’s reservation only for special events like this), but somehow missed it until it was almost fully booked.  Fortunately, they managed to squeeze us in, and they fed us as well as ever.

We both ordered the caramelised onion, mushroom and cheese tart.  The pastry was lovely, and the mushrooms and onion brought so much flavour.  The cheesy sauce was nice, but didn’t add that much, surprisingly. 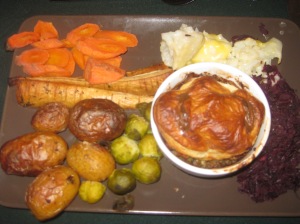 For the mains, we each got the proper Christmas dinner with beef wellington and chicken pot pie, the same as last year.  What a gigantic feast! The cauliflower cheese was beautifully creamy, the red cabbage was absolutely sensational, and the chipolatas were very salty and crisp.  We had differing opinions on the potatoes:  mine were all really well-seasoned and perfectly cooked, but Dr HH’s were a little bland and underdone.  The carrots and parsnips were fine, and the sprouts were good – I think my only complaint last year was that the veg was a bit unexciting, so it was definitely a step up this time.

The pie was rather lacking in chicken pieces, or they were too small and soft to give it any good bite, so the wellington was the better option for the main.  There was a huge jug of gravy being passed around too.  We were absolutely stuffed by the end of these plates!

We barely had room for dessert, but somehow, we managed. The sticky toffee pudding from Teatime Collective is one of my all-time-top-five-desserts, and of course it didn’t disappoint this time.  It was everything it should be: sticky, sweet, delicious.

It was £24 for three courses, and we were so full at the end that Dr HH had to roll me to the bus stop, which shows that it was good value for money.  (Other people requested their desserts to take away, but we went to eat.)  I believe there are a few other options in Manchester for a full vegan Christmas dinner, but truthfully, I think I’ll be back at Teatime Collective next year too.  Service is fast and friendly, portions are huge, and everything is tasty (except for Dr HH’s potatoes, apparently).

And I went back to good old Teatime Collective for my actual Christmas dinner too.  As we weren’t eating at home this year, I just needed something easy to make and transfer to my brother’s house.  I spent most of the week leading up to Christmas in the midlands with Dr HH’s family, so I didn’t have a lot of time for food shopping and preparations, so this seemed like an easy option, and more delicious and exciting than just picking something up off the shelf at Holland & Barrett.

It was such a good choice!  On Christmas morning, I just brushed it with milk and popped it in the oven. It was £10, which seems like a good deal considering how gigantic it was.  Yes, this is all for me, 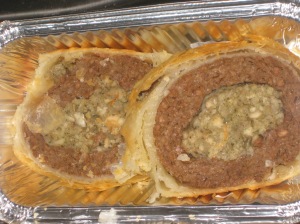 I’m not a complete glutton, so I merely sliced off a bit to take with me.  I forgot to take a picture of the full plate, but rest assured it was a total feast.  And of course, this means I will be eating wellington for the rest of the week!

So, if you are ever in Manchester for Christmas, make sure you see what this wonderful all-vegan establishment is up to.  You can also order cakes, mince pies, and sticky toffee pudding trays for Christmas dinner.  I’m sorely tempted to order the sticky toffee pudding and just sit in my pyjamas eating it straight from the tray with Dr HH – isn’t that what Christmas is all about?!

6 Responses to Vegan in Manchester: A Teatime Collective Christmas