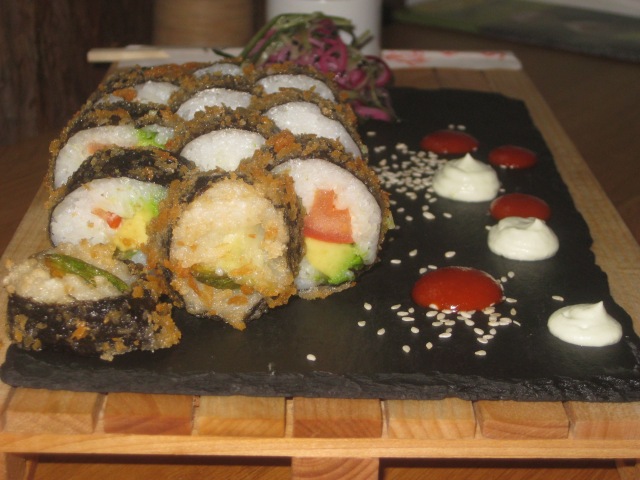 It’s entirely possible that I am never going to run out of vegan eateries to review in Prague:  there are so many of them!  Last year I told you about Etnosvet,  a fancy vegetarian restaurant.  Well, here’s it’s all-vegan spin-off, located just around the corner.  It’s open 8am-3pm and regularly has breakfast dishes (including chia pudding and open sandwiches), panini, soups, pizza by the slice, a baked good or two and four more substantial lunch options:  fried sushi, Asian noodle salad, bao bun and a burger. 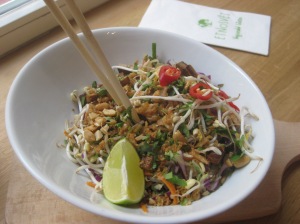 I first went there in October when Mama HH was visiting.  My mum had the Asian noodle salad:  glass noodles with beansprouts, tofu strips, courgette, red cabbage, coriander and peanuts.  It was very tasty, though there was a bitter taste coming from something she couldn’t place.  Generally, it was light and refreshing. 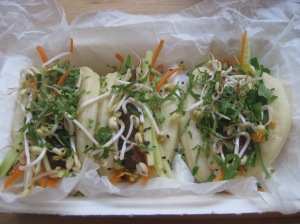 I had the bao buns with smoky tempeh, and they were delightful!  They were very messy to eat, but the dressing had a nice bit of spice and it was worth getting my hands dirty.  The tempeh was especially delicious, but isn’t it always?  Dr HH had these the next time we visited, and he was also a big fan. 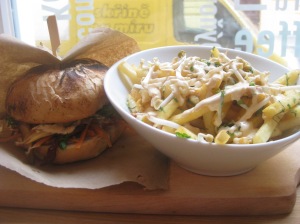 And I’ve also tried the burger, which was surprisingly hearty!  It’s the most expensive item on the menu, but I still wasn’t expecting it to be quite such a beast.  Actually, there was no burger patty, but the brioche-style bun was filled with delicious shiitake mushrooms and thinly sliced veg.  The dressing was quite similar to the ban bun, actually.  I was expecting a handful of chips on the side, but check out that gigantic bowl of French fries!  They were accompanied by bean sprouts, peanuts and sauce.  Personally, I’m a huge fan of the dry chip, but Dr HH helped me out and he certainly wasn’t complaining about the accompaniments. 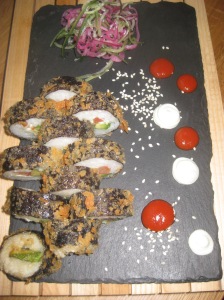 And just last week we finally tried the fried sushi.  We both absolutely love fried sushi, and the crispy texture here really didn’t disappoint.  The mayo and spicy sauce were great additions too, and there was also a pot of soy sauce.  We both enjoyed it, and my only complaint is that the filling was a little boring.  Avocado is always a winner, but the tomato was quite squishy and didn’t really add much flavour.  Some smoked tofu or shiitake would have packed a bit more of a punch.  That said, I would definitely have this again, and it’s my joint favourite with the bao bun. 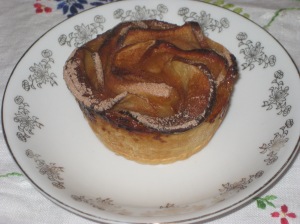 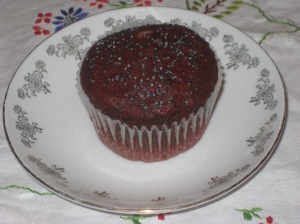 There’s always a little sweet treat in stock as well, and many moons ago Dr HH and I picked these up:  a little muffin and an apple rose pastry.  Both were really good.

I’m not the biggest fan of Etnosvet, because their menu is very limited for vegans (though I hear they have now added a vegan dessert, which is something).  But this vegan branch just around the corner is so fantastic.  It’s still a little pricey, but the food is good quality, it’s always warm in there (which is wonderful during the icy winters), and the staff are lovely.  Even if the main restaurant isn’t that helpful for vegans, the fact that they’d open up a second little branch just for us is really appreciated.  My next mission is to try them out for breakfast – if only they opened at the weekend!