When Dr HH told me a place called Brixton Balls had opened up in our neighbourhood, I thought he was just making up a funny name. When he continued that they had a separate vegan menu, I was convinced he was pulling my leg. But it turns out that he was right: vegan balls have made it to Prague!

Brixton Balls is a small, trendy looking place – there are a few stools at the bar, but it’s primarily geared towards a takeaway crowd. The menu is up on blackboards – meat and vegetarian menus are written in Czech and English, while the vegan menu is only in Czech. You can scope it out in English on their website first, or have faith in the staff to help you out (at least one British guy works there). We’ve found both the British and Czech staff to be very helpful about explaining substitutions, and to have a reassuring amount of knowledge about veganism.

The whole menu is, to be frank, balls. That is, meatballs for the omnis, and falafel-style balls for the herbivores. The balls are really flavoursome and hold together perfectly, and are available in a variety of dishes and combinations.

Unsurprisingly, the falafel lends itself well to the vegan balls & hummus option. The hummus was delicious, and there was plenty of seasoning and oil, as you can see. The surprise hit of this dish, though, was the salad – and I never thought I’d say that! I think cucumber is one of the worst vegetables (nothing’s as bad as celery, of course), but I devoured this whole pile of it, thanks to the delicious za’atar seasoning. You can also order this tomato, cucumber and za’atar salad as a side dish – I might have scoffed at that notion before, but now I’m sorely tempted to get it every time!

You know there’s a Brit involved in this operation because the vegan balls & baked potato option has an actual baked potato! It’s not uncommon in Prague to see baked potato listed as a side dish, and it generally turns out to be wedges. But this was a proper jacket potato topped with vegan bean chilli, balls, and tahini (you can swap the bean chilli for curry if you prefer). This picture is a bit blurry, but you can hopefully see that there was plenty of food. Dr HH really enjoyed this one – there was plenty of flavour in the chilli, and it was a good hearty portion.

On our next trip, he tried the vegan balls and pasta. The pasta, tomato sauce, balls, and tahini combination worked well, though he was sorry that they were out of vegan parmesan, which might have really elevated it. 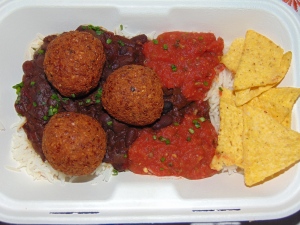 And here are the vegan balls and beans, which I got to take away. This was the same beany chilli (also full of mushrooms, I’m pleased to report), served with rice, a few crisps, and the spiciest salsa I’ve ever encountered. I liked that there were so many different components, all of them tasty!

I really hope this place thrives – it’s an exciting addition to Prague’s vegan scene, and they’ve clearly put some care and effort into their plant-based options. I’ll be back for a box of hearty food soon, and I might even treat myself to a side salad too!