Why are Creme Eggs so irresistible? Ok, it’s pretty obviously because of all the sugar. But nothing compares. Back when I became vegan in 2014, I was giddy to spot a vegan creme egg at Brighton VegFest. Now there are multiple versions to choose from! This year I decided to treat myself to a few different ones and see how they compared. It’s a tough old job, but someone’s got to do it! I found all three varieties very similar in terms of the fondant (and general priciness), but there were definite chocolatey differences. 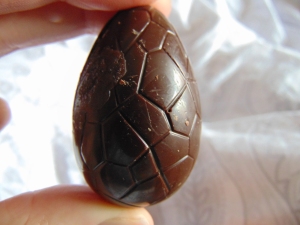 This is the same creme egg I tried back when I first went vegan, made by Considerit and available online from The Vegan Kind, amongst other places. It’s a shame that there’s a layer of chocolate in the middle, making it different from the traditional version – it’s essentially two halves glued together. The chocolate, while dark, is surprisingly sweet, and good and thin. Despite that central barrier, it’s a nice egg.

I’m a huge fan of this Sheffield-based chocolatier, and and I was delighted to see that she had made some creme egg halves. 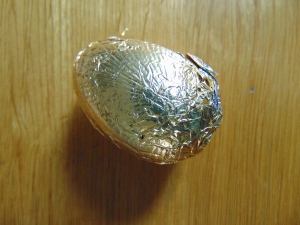 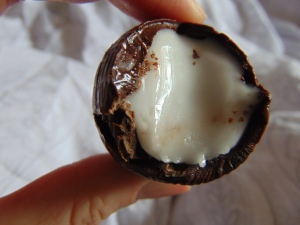 No sooner had I ordered some halves than individual, complete eggs became available too. The complete eggs did not have the chocolate layer down the middle, which was a step up from Considerit. The chocolate was a bit darker than I would have liked – I wanted proper milk chocolate! 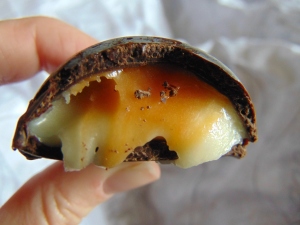 This independent vegan chocolatier is new to me, but I’m glad I stumbled across them on Instagram. They were selling boxes of 6 creme eggs for £15 (flavoured cremes were also available, but I went traditional) – not cheap by any means. I loved the presentation, with the cardboard egg box and pretty foil wrapping. I was a bit disappointed to see that they were only halves, but make no mistake, they were huge! The chocolate was milkier on these (57% dark anyway), which was definitely a good thing, but it was very thick, making it quite different from the original Creme Egg – but that’s not really the kind of thing I want to complain about!

In short, there is no vegan creme egg which perfectly replicates the milky one made by Cadbury’s, but there are solid options nevertheless. I think we could argue that the dark chocolate is more sophisticated and balances out the sweetness of the fondant filling for the adult palate, but personally I have sweet tooth enough for the original. I was initially planning on ranking these different ones, but I would genuinely recommend them all. The Choc Shop ones would make the nicest gift, but to be honest I’d scoff the lot of them again! Who knows what new options will pop up next year?!