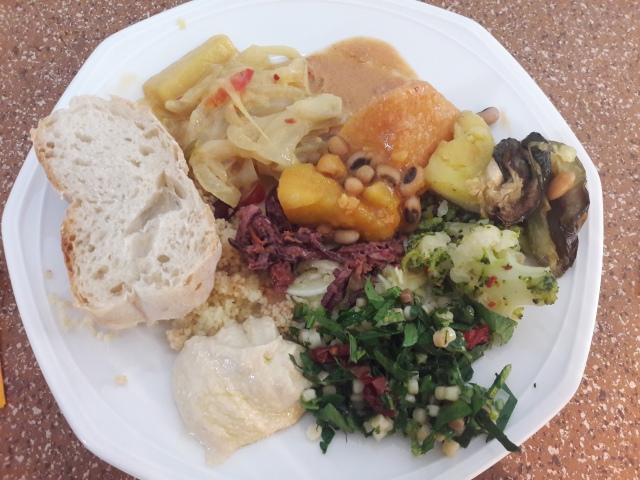 Berlin is just a few hours away from Prague and reasonably priced via bus or train, so Dr HH and I have been there enough times now that we don’t even have to pretend to be going to experience the culture or history anymore. Now we can just straight up admit that we’re going to for the vegan food, and TK Maxx. Part of the vegan food draw is the brunch scene. There’s nowhere in Prague that does the same all-you-can-eat, all-vegan buffet brunch that is prevalent in Berlin. We’ve already ticked off a few places, and this time we tried another one: Ataya Caffe.

Ataya Caffe is owned by an African/Italian couple, and so every Sunday they serve a brunch buffet with a mixture of both cuisines. This sounded super exciting, and we were very happy that they could squeeze us in for a last minute reservation. 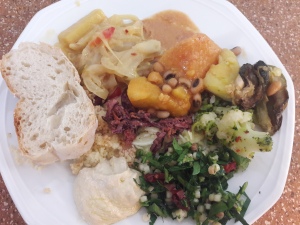 There were quite a lot of dishes to choose from, including two different kinds of hummus, an assortment of salads, some fluffy bread and crispy crackers, one aubergine antipasti dish, and a collection of African stews. There was a peanutty one that was very good indeed, and the hummus was also top notch. A pasta dish appeared at one point, but Dr HH reported that it was a pretty unexciting sauce. There was some falafel as well, briefly -that was good.

There were lots of things to try, and everything looked colourful and fresh, but the peanut stew and the anitpasti were the only properly remarkable dishes, and so we weren’t too fussed about going back for seconds and thirds as we usually would. 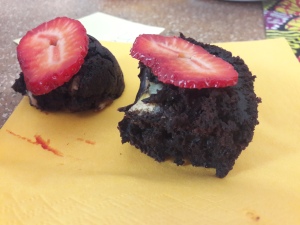 Alas, there was only one sweet dish – these little bites of chocolate cake were good and intense, but it would have been nice to have more options.

My main complaint about this is that it wasn’t really a brunch buffet so much as a lunch buffet – we couldn’t think of anything about it that seemed particularly breakfasty. And we were also expecting more fusion cuisine, whereas there wasn’t really much of an Italian flavour running through it at all.

All in all, it was a nice idea and solid food if you’re looking for a good lunch. But not the best of Berlin’s brunch options.