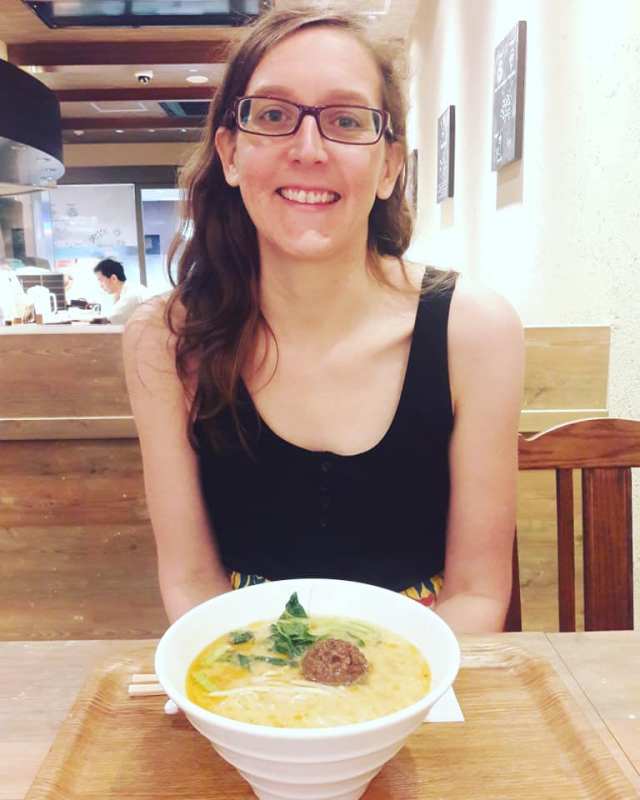 Several days into my Japanese VeganMoFo theme, it’s finally time for some bonafide Japanese food! I wasn’t really sure how much Japanese food we’d find in vegan eateries, and I’d expected to find a reasonable amount of vegan sushi. But in fact we only had sushi once in the whole trip, and the real dish that delighted us was ramen. I hadn’t eaten much ramen before, but I was very excited about the prospect of trying it at the various T’s establishments around Tokyo, as I’d heard from other vegan travellers that this is Tokyo’s must-visit vegan establishment. 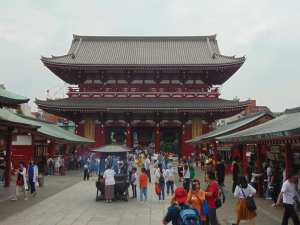 Usually I’m quite the traditionalist when it comes to breakfast food, whereas Dr HH believes that any food at all can be eaten first thing in the morning. So he was quite shocked on our first morning in Japan when I suggested that we go for a ramen breakfast. He was less shocked when I explained that T’s was basically the only place in Japan that serves vegan options before 11am: he knows I wake up hungry! Suffering with jet lag, we woke up at the crack of dawn on our first day in Japan, watched England get dumped out of the Women’s World Cup, and then battled through the rush hour traffic to go for a restorative bowl of ramen at the branch of T’s in Ueno Station. (As a bonus, it’s in the same neck of the woods as Senso-ji, the temple at Asakusa. 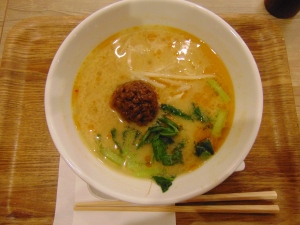 The breakfast menu is served from 7-10am and has four options. I kicked off the holiday with the Tantan noodles, and they were amazing! The broth was quite nutty and had a really good kick to it, and T’s did not skimp on the noodles. There were also some beansprouts and greens in there, along with what we deemed a “beefy ball” which was supremely flavoursome, though trial and error taught me that the best approach was to crumble it and spread the goodness around.

It was one of those rare occasions where neither of us was sure who had chosen the better dish: Dr HH’s shouyu (soy sauce) ramen was also exceptional. The broth was really savoury and delicious, with a good hit of soy sauce. The noodles were accompanied by beansprouts, spring onions, and some tofu chunks that were exciting, if a bit soggy. All in all this was a good hearty breakfast and set us up for our Tokyo adventures, and for a love affair with ramen that would continue throughout the holiday! 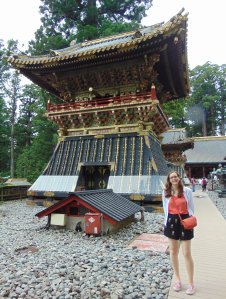 There’s another branch of T’s TanTan at Tokyo Station, and we actually had three meals from there on the day we went for a day trip to Nikko (highly recommended, by the way – it was a nice change of pace from Tokyo, and the temples were amazing).

The breakfast menu, which also starts at 7am, was identical to that of Ueno Station. Dr HH tried the same dish I’d had the day before, while I resisted that temptation and tried something different. The dashi-udon had quite a simple broth that lacked the depth of flavour of the other dishes. Udon noodles are my favourite, and these were delightfully fat and lovely. The tofu was really good too, but I wish there’d been more of it. I wouldn’t rush to try this one again. 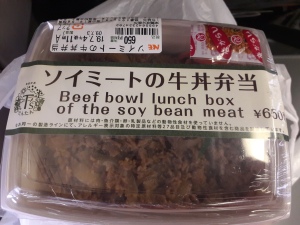 For our lunch we got some beef lunch boxes to take away with us and eat in Nikko. Disappointingly, they came in a lot of plastic (everything in Japan is made of plastic and wrapped in plastic), but they were really tasty and better than what I would have expected from a takeaway lunch. The beef had a great texture, and there was a nice gingery flavour running through it. And the portion of rice was very generous. This was solid packed lunching! 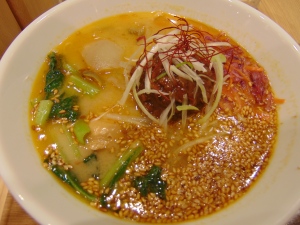 And then we were back for more in the evening when we got off the train! The gold sesame tantan had a similar nutty broth to the breakfast one, and the same beefy ball. However, it was more exciting than the breakfast version, because it had more stuff in general, including a dollop of peanut butter and a heap of sesame seeds. These are all good things in my book!

Dr HH was slightly less impressed by his ma-po tantan, which had a great savoury broth but quite bland tofu. Fortunately, the staff bring out a little pot of spice with each meal, so he could add a bit more flavour himself.

On our last day in Japan, we got the shinkansen from Hiroshima back to Tokyo and couldn’t resist popping in to T’s one more time for a quick lunch. This time I went for the black sesame noodles, which looked suitably dramatic. This was quite similar to the golden version, but perhaps not quite as good. 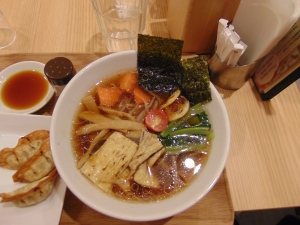 And we have no recollection of what Dr HH ordered, we were too tired to make any notes by this stage! There were lots of vegetables, we weren’t keen on the addition of cherry tomatoes, and it was the least impressive of the bunch. So let’s pretend we made a strategic decision not to take note of its name…

There are a few different side dishes that can be added to each bowl – every time we went, we opted for the dumplings, because we’re no fools. They were nicely fried and flavoursome. We had some good dumplings while we were in Japan, but I do wish there had been more! 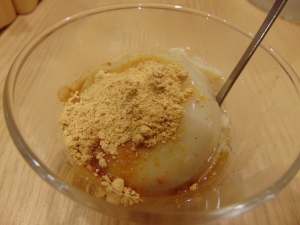 Would you believe that these are two completely different desserts?! The top one is soy milk pudding, while the bottom is ice cream. The pudding was strange and gelatinous, and pretty much exactly what you would expect from a soy milk pudding: fine, but weird. The ice cream was better, if only because it was less gelatinous, but these are never going to be contenders for the best dessert of the holiday. 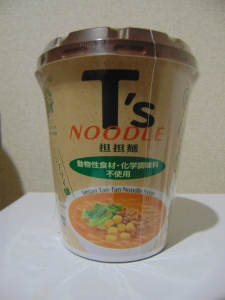 I think every branch of T’s stocked these pot noodles as well. I’ve never been a fan of these products, but this one made for a solid and reliable emergency meal. It came with four components: noodles, sauce (an actual packet of sauce, it wasn’t dried), some dried veg, and a bit of spice. The spice was certainly spicy! It was easy to make just by adding boiling water, and we both found it better than expected. Again, given the dearth of vegan breakfast options for the early birds, this was useful to have on standby.

Possibly the best thing about the T’s chain is that there’s a branch at Narita Airport! This was truly a game changer for us. On our flight from Dusseldorf to Tokyo I’d found the in-flight food largely inedible, so we were a bit anxious about how we’d cope on the long journey home. We had snacks with us, of course, but we decided to get to the airport nice and early so we could fit in a proper breakfast before our flight. The menu was shorter than the other branches, and contained no dishes that were unique to this branch, so nothing special to report here, besides the novelty and relief of having a great vegan option in an airport! It was a fitting farewell to the Japanese vegan scene, and we were very pleased that our ramen adventures both started and ended in T’s. There’s lots more good ramen to come this month too…

Noodles for breakfast: yay or nay? Which one of these dishes would you try?