I had been hoping and expecting to have a lot of dim sum in the coming weeks – Dr HH and I had a two week trip to Beijing, Taipei, and Hong Kong booked. That’s no longer on the cards for obvious reasons, but at least we found somewhere to get dim sum domestically! This is a relatively new spot in Prague, and I’m already a big fan. The menu is fairly small, but it’s good to vegans, with four dumplings and a soup all clearly labelled. 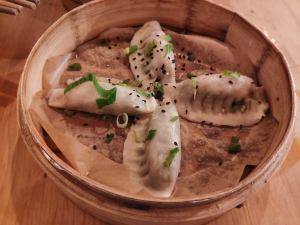 When we go back though, we’ll probably ignore the classic menu altogether though and go straight for the more expensive “specials”. There are again two vegan options: robi and spinach, and robi and tofu. I can’t remember if robi is uniquely Czech, but it’s a kind of mock meat made from beetroot, and it’s very good indeed. These little morsels had a lot of flavour and were, as the name suggests, rather special. We’ll definitely be back for more! 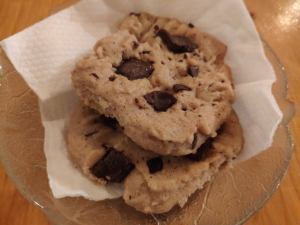 And there’s only one dessert on the menu, and it’s vegan! The cookies were not the perfect bake (a little too hard), but they were tasty and the chocolate was especially good. I don’t think there are enough cookies in restaurants, so this was a welcome treat.

So while this was not exactly the dim sum I was dreaming of, I’m very happy to have such a good option close by. Who needs international travel anyway?!