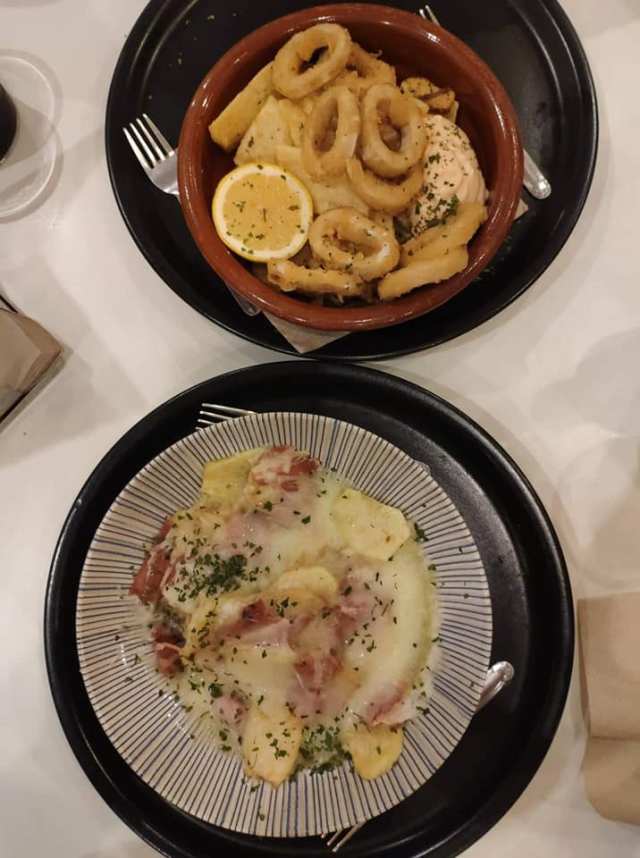 Dr HH often berates me for my unwillingness to share food, even though I’ve considerably improved since we first met and I used to scowl and harrumph if he asked for so much as a chip (in my defence, he does invariably go for the chip I was most looking forward to eating). I now almost always offer him a bite of what I’m having, and there are rare occasions when I consent to order a few different dishes to share, on the strict understanding that I manage the division of the food. 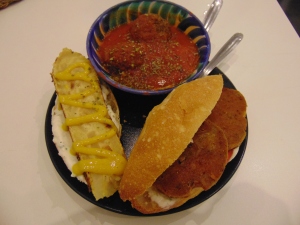 So it’s possible that he was not very keen to go back to Spain with me and have to negotiate the sharing of various tapas plates. But he needn’t have worried – I view tapas as a food that is meant to be shared, and there’s something very appealing about sitting at a bar in Spain and pecking at some tasty morsels with your loved one. El Ojú was top of our list of eateries to target in Granada, as it was an all-vegan tapas spot a mere stone’s throw from our hotel. It did not disappoint, and nor did my sharing skills, I think it’s safe to say. 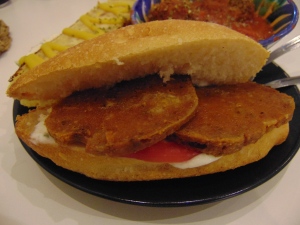 The chorizo slices in the sandwich were very good indeed – really flavoursome. To be honest they got a little bit lost in all the bread, it might have been nice to have them just on one slice rather than a sandwich, but I assume the Spaniards know what they’re doing when it comes to serving tapas! 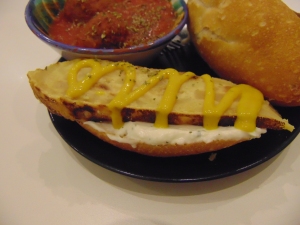 This is not entirely what I was expecting from the tortilla – a fairly thin slice of tortilla on bread, as opposed to the big hearty slab I had my heart set on. Obviously if it’s a free side with a drink, I can’t complain too much. But it just seems like a weird thing to put on bread. It was nice, but not entirely what I’d been hoping for. 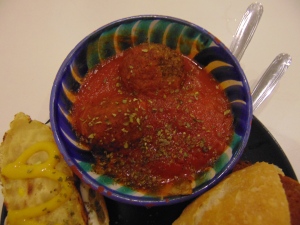 We really enjoyed the meatballs – I think they were better than the ones we had in Sevilla, and you can see from the sauce that they were well-seasoned. 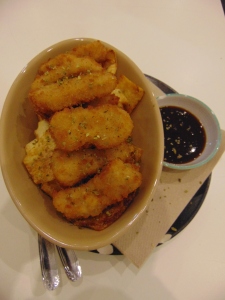 Like many small children, if I see chicken nuggets on a menu I simply have to order them! Is there anything more comforting than a chicken nugget?! These were great. The mock chicken was really tender, and the coating was good and crispy. I’d be happy to eat these every day! 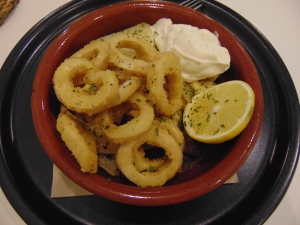 Vegan calamari is not something you see on a menu too often, which means it’s always hard to turn down when it does pop up. I never had calamari before going vegetarian, so I don’t have a good frame of reference, but these had an interesting rubbery texture which was reminiscent of some seafood I had back in the day, so I assume they were fairly authentic. These were really tasty, but I wish the mayo had been properly on the side rather than in the same bowl – some of them got pretty sloppy. 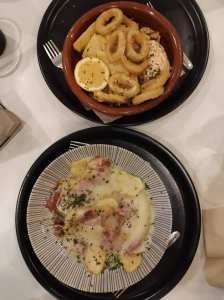 When we returned on our last night we couldn’t resist getting the calamari again, and this time we also shared this dish of cheesy, bacony potatoes. I’m not sure if it’s traditional Spanish tapas fare, but unsurprisingly, it was really good. Gooey, meaty, carby…three of my favourite things!

This little place was jumping both nights when we went (in fact, it was busier on a work night – how wild!), and mostly filled with young locals enjoying wine and tapas, and tourists trying as much as they humanly could. It’s quite cheap and cheerful rather than a fancy spot, and it was one of our favourites in our short stay, in terms of the novelty of the items on the menu.

So if you feel that you have the generosity and maturity to share delicious dishes with someone, make sure this is on your list for Granada. Or if not, go by yourself and stuff your face!