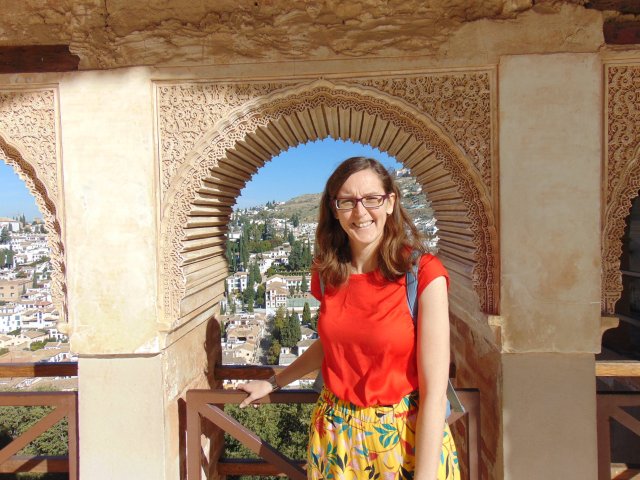 Like most British people my age, my primary association with gazpacho soup will always be the dying words of Arnold Rimmer in Red Dwarf. I don’t think the UK generally has the weather for cold soup, and I think it might be a tough sell anyway – a big bowl of soup is so wintry and comforting, who would even want it cold? 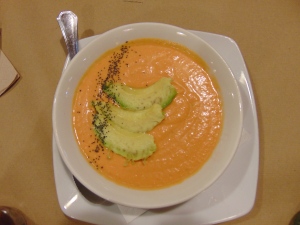 Well, Dr HH decided to give it a whirl while we were in Spain! I refused, in solidarity with Rimmer, of course. This was at Hicuri, one of the oldest meat-free restaurants in Granada – it hasn’t always been entirely vegan, but is now. It’s very highly rated on Happy Cow, but we were ultimately a bit underwhelmed by it, starting with this gazpacho (which is only on the menu March to October). It’s hard to say though if Dr HH was underwhelmed by this particular version, or by gazpacho as a whole.

The menu here was very extensive, yet Dr HH and I both ordered the same thing: cordon bleu seitan with chips. I know that’s not really typical Spanish cuisine, but we were eating a lot of that elsewhere, and after a long day of sightseeing sometimes you just need some mock meat and chips!

I would have liked a bit more colour on the chips, and a bit more oomph to the seitan steak. The menu promised cheese and bacon, but the layer of cheese was very thin and dry, and there wasn’t really a bacony taste or texture to it, so it was a bit disappointing. We ate it up though – it was fine, but not mind blowing.

I’m always a little wary of restaurants with long menus, because those who only offer a few things tend to do them better. I fear that was the case here. However, we are probably in the minority, because the place was absolutely packed and there are plenty of five star reviews on Happy Cow. Maybe we simply ordered the wrong things? I do feel though that every city has that one vegan eatery that most people rave about and I just don’t quite get it (V Rev in Manchester, Maitrea/Lehka Hlava in Prague). This could be the one for Granada!

Is there a vegan restaurant in your town that everyone loves except you?