Lehka Hlava is one of Prague’s most popular meat-free eateries, but I find everything about it a bit baffling – including its popularity.  Let’s start with the decor, though.  We were seated in quite a dark room with a dark blue, starry ceiling.  It sounds nice and perhaps romantic, but this was offset by plastic tables designed to look like wood, which radiated light.  Yes, the tables lit up.  It was a little odd – I mean, why not just have wooden tables if that was the look they wanted?  Anyway, it was different.  Different can be good.

The food got off to a really good start.  There are six vegan starters, and I tried the excitingly-named tofoie gras:  a smoked tofu pate topped with cranberries and served with tasty bread.  I would have preferred it without the cranberry sauce, but it was absolutely fantastic anyway.  Such a great flavour!  There was probably a bit too much bread for a starter, though that’s not something I’d ever imagined complaining about. 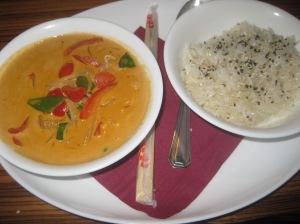 There were fourteen main course options.  Fourteen!  Each was from a different international cuisine.  Half of them were vegan/veganisable, but they weren’t exactly inspiring.  Raw spaghetti, risotto, sweet and sour tofu, Thai curry…there was nothing I hadn’t tried before in another restaurant.  I went for the Thai curry, and it was tasty, but not really special.  It’s a good meat-free restaurant, but not a great one, for me – I think it spreads itself a bit too thin by offering so many dishes from so many different cuisines, when it might be better to focus on just doing a few things brilliantly.

I can see Lehka Hlava being more popular with groups of mixed dietary requirements – vegetarians and meat-eaters might find the choices more exciting.  Also bad news for vegans:  I asked which wines were vegan-friendly, and was told they didn’t know.  I’d be very surprised if I were the first person to ask, and it’s one of my pet peeves when restaurants that target the vegan market don’t go that extra mile for us.

It is extremely popular though, so if you are going, I’d book.  Still, for anyone planning a trip to Prague I think there are many better options I would recommend before Lehka Hlava and its sister restaurant, Maitrea.  The food certainly isn’t bad, but nor is it very inspired.